By Savanah Silva
Posted on September 6, 2015 | Sports | Comments Off on Cross-country makes statement at first meet 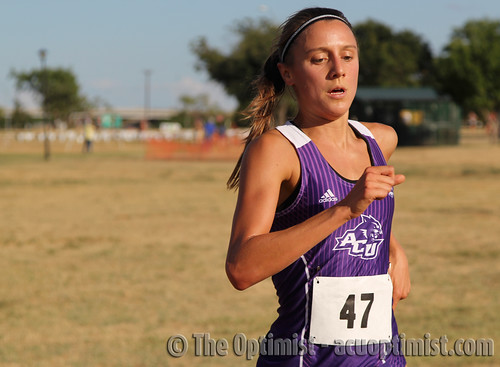 The women’s cross-country team finished with a perfect score Friday evening taking the top spot at McMurry’s Bill Libby invitational. The men’s team would take fifth in a field of nine teams.

On the women’s side, the Wildcats took the top seven places, scoring a flawless 15 points. Runner-up Angelo State had 75 points and third place finishers, Texas Wesleyan had 98.

“I expected them to do well and they did just that,” assistant coach Ray Walker said.

“I’m setting the bar high for myself,” Garcia said, “It’s going to push us to run faster because we’re all competitive. We’re going to train harder and move forward.”

“I want this to show them that they are better than they were last year and I think this meet did that,” Walker said.

The men’s race was a 5k instead of the usual 8k, making the competition even more grueling combined with the West Texas heat. With a field of nine schools and 85 runners, Senior Daniel Block finished third with a time of 15:39 quickly followed by sophomore teammate, Ryan Cleary.

Overall, the men’s team finished fifth with 108 points. South plains would win the team title with 31 points and Texas Wesleyan would be a distant second with 67 points.

“Even though there wasn’t any D1 competition, it let’s me know that I can compete with any of them,” Block said, “I can run faster as the season progresses.”

The Wildcats will be back in action in two weeks when they host Texas Tech, Angelo State, South Plains and Western Texas in their first home meet of the 2015 season at Sherrod Park. Races will begin at 5:30 p.m.