Best is yet to come for ACU volleyball

By Jonathan Raitz
Posted on September 16, 2015 | Columnists,News,Sports | Comments Off on Best is yet to come for ACU volleyball 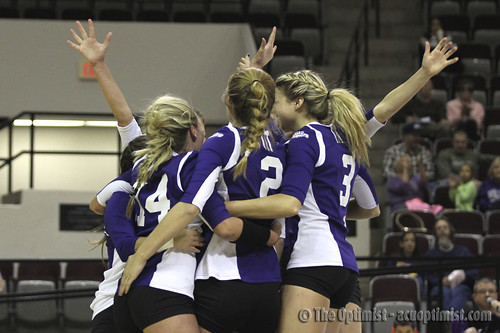 The ACU volleyball team recently fell to 0-10 on the year and has produced just five winning sets in 35 opportunities. At this point, many fans worry that a second consecutive losing season could be looming. However, fans need only look past the looming deficits and analyze the Wildcats season more closely.

In the 10 games, the Wildcats have faced eight teams with winning percentages of .650 or better, including no. 14 ranked Arizona, TCU, Wichita State and Texas A&M. The Shockers and Aggies both received votes in the latest American Volleyball Coaches Association poll on Sept. 14.

The Wildcats also took North Texas to five sets this past weekend, and just missed out on their first win. North Texas is a team who made it to the semifinals of the Conference USA tournament last year and swept the Wildcats in straight sets twice last year.

Aside from playing the toughest non-conference schedule since moving to Div. I, the rest of the Southland Conference has not exactly wowed their competition. Along with playing significantly easier non-conference matches, only three teams boast winning records. While a majority of the other teams are working through their own losing streaks.

In addition, the Wildcats have also seen increased production from their talented freshman class. Kendall Bosse started off the season as a very reliable second scoring option for the team and Lauren Walker is coming off arguably her best streak of games this season. Jacey Smith is also emerging as a consistent option for the Wildcats, stepping up to fill a void left by the injury to sophomore Stephanie Schoelman.

Regardless of the wins and losses, this is still a team with a lot of talent and a lot they want to prove. Almost every set has been within reach, just one more scoring run away from becoming a win. So before you start to believe the rest of the SIDs in the Southland Conference, who think this is a second to last place team, let the Wildcats play a few conference opponents. And remember it seems like yesterday that the Rangers, who now lead the AL West by .5 a game, were 9.5 back. It can happen in an instant.