By Collin Wieder
Posted on August 21, 2015 | Sports | Comments Off on High-Powered offense hopes to give ‘Cats edge 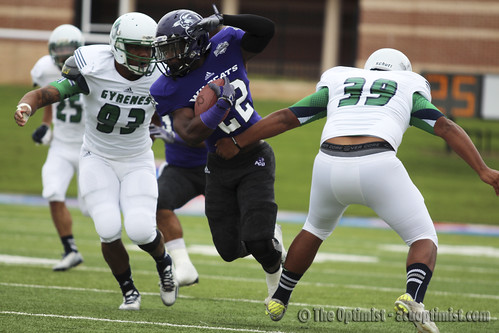 ACU football has had a tradition of winning that did not stop with the move to the Football Bowl Subdivision’s Southland Conference. The Wildcats increased their .500 or better streak to nine consecutive seasons by going 6-6 in 2014.

The expectations should be fairly high as most of the offense returns for the 2015 campaign. The Wildcats return not only eight of 11 starters but multiple contributors as well. Redshirt junior quarterback Parker McKenzie (3,084 yards, 22 touchdowns and nine interceptions) comes off his first season as starting quarterback that earned him second team all-Southland Conference honors. 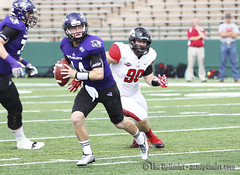 The backfield flexes its depth muscle by featuring four strong tailbacks: senior Herschel Sims, sophomore De’Andre Brown, junior Adrian Duncan and sophomore Randy Gober. Brown was a breakout performer in 2014. He rushed for 962 yards and seven touchdowns at a 7.0 yards per carry average. Sims showed flashes of brilliant play, but struggled through an injury plagued season to rush for 559 yards and four touchdowns at 5.3 yards per carry. Gober and Duncan played strong in backup roles last season combining for 230 yards and five touchdowns.

Brown is highly confident in his ability and the groups ability to perform at the Div. I level.

At tight end, the Wildcats lost two seniors last year in Noah Cheshier and Jonathan Parker. Fortunately, they bring back senior tight end Jamie Walker. Walker has caught only 23 passes for 225 yards in his career at ACU, but has been a red zone monster as he has recorded 10 touchdowns.

Head coach Ken Collums said that having this many players to spread the ball around to is a good problem to have.

The line for the ‘Cats has quite a bit of experience as well with senior Codey Funk, sophomore Riley Mayfield, sophomore Chance Rieken and sophomore Hayden Wall.

Another player to watch this season will be senior do-it-all wide receiver/cornerback/kick/punt returner Jonathan Epps. Epps has succeeded at every position he has tried compiling 933 all-purpose yards, two touchdowns, 30 total tackles and two interceptions. The list goes on and on for this explosive offense. They should improve on their already impressive 2014 numbers to be one of the best offensive teams in the FCS in 2015.

On defense, the Wildcats lost a lot of starters but return a lot of depth. Starting linebackers sophomore Sam Denmark (77 tackles, four tackles for loss and two interceptions) and senior Lynn Grady (52 tackles and seven tackles for loss) anchor the Wildcat linebacking corp. Grady returns for his senior season after missing the final three games last year. Pass-rushing linebacker Travis Tarver II moves into a starting role after recording three tackles for loss and two sacks last year. Sophomore Bryson Gates is a player to watch in this group. He recorded 11 tackles as a freshman and should get more time this season. 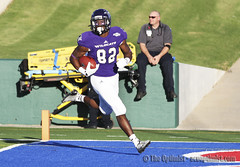 The defensive line brings back two solid players in senior Rishaad Wimbley and sophomore LaMarcus Allen. Wembley and Allen combined for 8.5 tackles for loss and five sacks. Beyond those two the Wildcats have multiple contributing letterman from last season. Senior William Moore, junior Josh Bloom, sophomore Dylan Douglass and sophomore AJ Tolbert look to fill in the huge holes that were left by Nick Richardson and Damon Williams.

In the secondary, the Wildcats have three starting spots to fill. Safeties Justin Stewart and Angel Lopez graduated leaving multiple players up for the spots. ACU seemed to be set at corner with sophomore Terry Ausborne (40 tackles, one interception, one forced fumble) and senior Keith Barnett. Unfortunately, Barnett sustained an ACL tear last week, ending his season, leaving more questions in the secondary. Epps should help with that role along with a multitude of corners that were used last season.

The 2015 ACU Wildcats have a solid roster built around them, and should be able to surprise their Southland Counterparts again.