By Collin Wieder
Posted on May 5, 2015 | Sports | Comments Off on Bonneau joins 700 club with sweep of Privateers 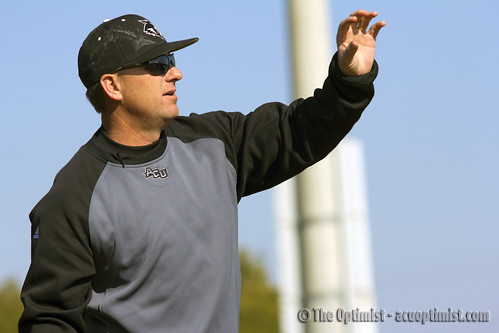 The Wildcats 8-6 win over New Orleans University gave head coach Britt Bonneau career win no. 700. The win ranks him amongst the top in all collegiate baseball.

Game 1 proved to be the toughest of the series as the ‘Cats had to rally for an 8-6 win.

The Privateers held a 6-2 lead heading into the seventh inning before the ‘Cats exploded for a five-run inning to take the lead.

ACU sealed the win in the top of the ninth by adding a run to give Bonneau his 700th win. Sophomore second baseman Russell Crippen led the team at the plate going 3-for-5 with one run and one RBI.

Junior pitcher Aaron Mason recorded his first win of the season with his move to reliever.

Bonneau moved his career record to 700-391-1 with the win and kept rising over the weekend.

“This wouldn’t have happened if God hadn’t put me at ACU,” Bonneau said. “Cari (Bonneau’s wife) and I have given everything we can to ACU, because ACU took a chance on a 26-year-old immature kid when I became the head coach in 1997.”

Game 2 featured another great game from senior pitcher Thomas Altimont. Altimont threw seven shutout innings, giving up only five hits and striking out nine batters. The ‘Cats left no doubt as they lead wire-to-wire for a 7-3 win. Altimont lowered his season ERA down to 3.57 to lead all Wildcat starters.

Senior pitcher Ladgie Zotyka picked up his first save of the season as well.

ACU’s bats managed the seven runs on 10 hits with senior center fielder Colton Hall going 2-for-5 with one run. Junior catcher Alex Copeland added a 2-for-4 performance at the plate, and Eager went 2-for-5 with two runs as well.

Game 3 started off slow as a pitching duel ensued until the fifth inning. ACU led 1-0 heading into the fifth, then they scored seven innings in the fifth to take an 8-0 lead.

New Orleans’ small comeback in the seventh fell short as senior Ladgie Zotyka threw three shutout, unearned innings to give the Wildcats the sweep and Zotyka his second save of the weekend and season. Crippen sealed the win in the ninth inning with his first career grand slam to give ACU a 12-5 win.

Junior pitcher Garrett DeMeyere had a solid performance but was pulled in the sixth after giving up five runs. DeMeyere did pick up the win to move his record to 3-4.

Crippen finished his weekend off with a 4-for-5 game, five RBIs and two runs. Junior infielder Heath Beasley went 3-for-5 at the plate as well with three runs.

ACU returns to mound at 6 p.m. Friday at the Crutch to play conference opponent Northwestern State.