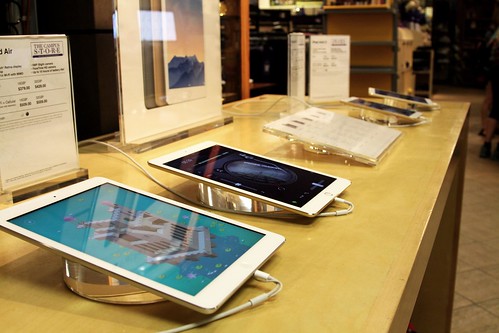 Most students walk into class and immediately pull out their laptops or iPads. However, Kaitlyn Kanis approaches class differently than the average iPad-toting ACU student by forgoing electronics during class. When Kanis sits down in the classroom, she pulls a pencil and paper from her backpack and takes notes the old-fashioned way.

“I prefer using pencil and paper and traditional notecards over technology,” said Kanis, sophomore environmental science major from Churubusco, Indiana. “I really do not like using the iPad for course work.”

The ACU administration has regularly encouraged and mandated the use of student and professorial technology in the classroom. However, Kanis’s actions highlight an increasingly common trend at ACU. Some students and faculty are shunning the encouraged university practices and developing their own philosophy for classroom technology. In some cases, the students’ personal and unique philosophies disregard the university policy.

The university requires all incoming students to purchase or own an iPad for the mandatory Cornerstone class, which takes place in the fall of a student’s freshman year. In previous years, the university funded the purchase of the iPads through rebates at the campus store. Two years ago, the university decided to discontinue the rebates. Now, students are required to purchase the iPad on their own, without the price factored into tuition.

“I bought the iPad because I was told by the ACU administration that I was required to have one for class participation,” said Lily Auker, sophomore Ad/PR major from Prescott, Arizona. “I never use it, mainly because all of my teachers don’t allow electronics in class.”

Not surprisingly, students like Auker are frustrated that the iPads required by the university are often banned in class.

“I’m actually quite angry, because an iPad is a lot of money,” Auker said. “I really just prefer using my laptop.”

Although some professors only resist the pressure to incorporate technology into daily classroom activities, other professors, like the those encountered by Auker, have banned students’ use of technology during class.

Psych 120, taught by Dr. Richard Beck, is a recent example. The class syllabus states, “In order to have face-to-face conversation, sustained attention and to eliminate distractions for those sitting directly behind you, the use of laptops, smartphones and tablets is prohibited during lectures.”

Bans like this are not surprising or outlandish if one considers the level of possible distraction posed by electronic devices to the user and user’s neighbors. However, across ACU’s campus, these bans seem to strike a sensitive chord with some students.

The complaints Auker voiced were routinely echoed by other students. However, Jack Hodge, junior criminal justice major from Dallas, disregarded the university requirements altogether and never bought an iPad.

“They asked me to, but I already had a laptop,” Hodge said. “I didn’t see the need.”

Despite the official requirement for an iPad in Cornerstone, Hodge said he didn’t miss any learning experiences or educational opportunities because he used his laptop or smartphone instead. Similarly, his Cornerstone professor did not care which device Hodge used in class.

Because he has had bad experiences with classroom technology, Hodge said he believes in keeping schoolwork at school to facilitate the face-to-face learning style. However, Hodge acknowledged that fighting the continued integration of technology in the classroom is a bygone attitude in 2015.

Because technology will continue to permeate the classroom experience at ACU, Hodge made a suggestion to improve the situation for ACU’s iPad-laden student body. He suggested ACU robustly indoctrinate and teach its professors the numerous engaging ways to utilize the students’ technology in class.

What you can buy instead of an iPad. (Graphic by Elijah Evans)

“If they’re still asking kids to purchase iPads, then they need to teach professors how to use them in class,” Hodge said. “Right now, the experience is distant and, sometimes, very annoying when professors update the online syllabus without telling the class.”

Several students were not angry like Auker or blatantly against the current system like Hodge. Instead, these students desired to pursue an alternative method of classroom technology. Several highlighted their desire to take notes and perform class-related tasks with a device or medium that was more familiar and standard than an iPad or similar tablet. A healthy contingent were like Kanis, preferring to use paper accompanied by a writing utensil.

Kanis has also chosen to study her own way. She regularly studies separated from the constraints of technology, which, she points out, are constantly capable of unexpectedly wreaking havoc on any homework stored on an electronic device or in the cloud.

“I feel like being required to have and use the iPad intrudes on my ability to choose how I go about doing school, and I dread having to use it, because it’s just another thing I always have to remember and charge,” Kanis said.

Several professors, who asked to remain anonymous, discussed their experiences in classes teaching a student audience sans technology. They agreed that their students had never expressed overt dislike or annoyance toward a professor or a professor’s ban on the use of technology in the classroom.

Despite evidence indicating Generation Y is addicted to their smartphones and their social media accounts, many ACU students said they genuinely enjoyed the classroom experience in a sans-technology environment.

Steven Hendry, senior political science major from Pasadena, California, was allowed to use personal technology, predominantly his laptop, in all but one class during his four years at ACU. Dr. Fred Aquino was the sole professor to include a no-electronics clause in the syllabus, Hendry said.

Despite the differing opinions, some students agreed ACU needs to implement a new approach to iPads and the underlying Mobile Learning Initiative. They suggested ACU revise the iPad requirement and make it more affordable, train professors to effectively utilize student technology in the classroom, implement a uniform and campus-wide policy regarding the iPad’s place in class and establish campus-wide iPad etiquette for the users of the device.

Still, for some, the iPad is simply stressful because of cloud storage, fragile hardware and other technology-specific hassles.

“I often feel like there are a lot more chances for something to go wrong when I am using the iPad, such as it dying or malfunctioning or losing my notes and important information, than if I was using paper,” Kanis said.