Speaker from UN Women Skypes in with faculty, students

By Abbey Bowling
Posted on April 14, 2015 | News,Showcase | Comments Off on Speaker from UN Women Skypes in with faculty, students 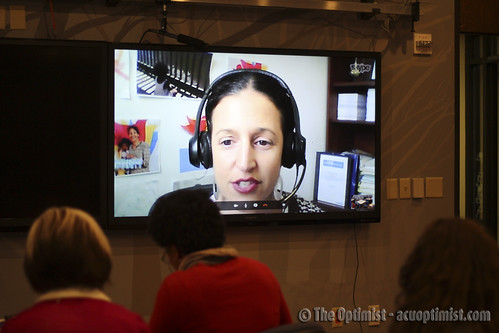 Dina Deligiorgis, a representative from UN Women, spoke to ACU faculty, staff and students Tuesday about the progression of gender equality and how to end violence against women.

Deligiorgis is a knowledge management specialist for UN Women, a United Nations organization that was created to address the issue of gender inequality.

“From a young age, I’ve been very concerned with everyone’s wellbeing and it’s just over time that I started realizing that my heart was really in gender equality work,” Deligiorgis said. “Violence against women and girls, in particular, is such a lifelong detrimental experience for women. It actually impinges everything else – it impinges their productivity, their mental and physical health… it’s something that colors the rest of their life experience.”

UN Women particularly works with prevention methods of violence against women. They implement concepts at the individual level and community level with institutions to deconstruct masculinities, femininities, relationships and social norms, Deligiorgis said.

“A trend we’ve seen in the last five years is engaging men and boys to end violence against women and girls,” Deligiorgis said. “Not because they’re primarily the perpetrators, which does happen to be the truth, but because there are a lot of male champions out there who understand and believe that violence is wrong.”

This semester, a faculty reading group has been reading former President Jimmy Carter’s book, A Call to Action: Women, Religion, Violence and Power, in which Carter addresses the issue of ongoing discrimination against women.

“Carter’s book reads almost like a catalog of 11 primary ways that violence is practiced against women around the world,” said Joyce Haley, co-leader of the reading group. “He describes the discrimination and abuse as the number one challenge in the world today and points to the role the worlds’ main religions, especially Christianity and Islam, contribute to the ongoing violence.”

The book raises the question of what can be done to help advance the progression of women around the world to create equity and fairness, and one of the points Carter argues is that a correct interpretation of religion does not support the violent treatment of women, said Trevor Thompson, co-leader of the reading group.

“Carter directly calls on people of faith to step up and confront religious beliefs and systems that abuse and oppress women and girls,” said Jennifer Shewmaker, associate professor of psychology and member of the reading group. “I think that’s really important, and as a faith-based school, we should be leading the charge when it comes to offering equal respect, opportunity, and access to every child of God.”