Softball travels to Huntsville to take on Bearkats

By Savanah Silva
Posted on April 16, 2015 | Sports | Comments Off on Softball travels to Huntsville to take on Bearkats 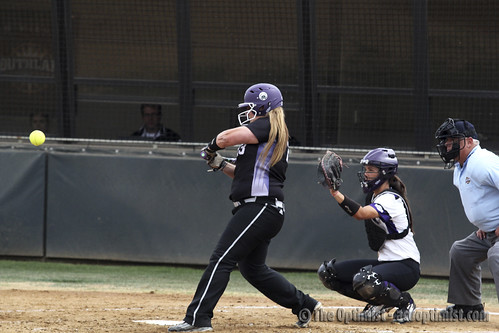 After coming off a sweep to Stephen F. Austin, ACU will look to get back on track against Sam Houston State.

The softball team will hit the road this weekend and travel to Huntsville to take on conference rival Sam Houston State.

The Wildcats are coming off a tough sweep by SFA last weekend where they were shut out in three games. Freshman infielder Peyton Hedrick had an incredible first night of the series going 4-for4 with two home runs. She also had three runs and four RBI’s.

The freshmen really stepped up against Stephen F. Austin with infielders Baylee Travers and Kaleigh Lightsey scoring in the second game adding to the rally that almost was. The ‘Cats came within one run of SFA, but the Ladyjacks took that game along with the last one.

Going into this weekend’s series with a conference record of 3-15 doesn’t discourage them at all.

“We’ve been having a hard time getting everything to come together in games,” said senior pitcher Emily Seidel. “Defense, hitting and pitching. But we’ve never stopped fighting, and we’re not the type of team that gives up. “

Seidel has had an important season for the ‘Cats with help from her teammates.

“I’ve got to take control of the game through all seven innings,” Seidel said. “Get ahead in the count with first pitch strikes, and move the ball. The great thing about our lineup is that I know they’re going to score runs.”

The coaching staff has really focused on teaching the girls to play to win rather than playing not to lose. Instilling that mindset is the thing that could make a tremendous difference for the ‘Cats.

ACU has improved all season on slowly shutting down opponents defensively. Though the women may not score as many runs as head coach Bobby Reeves may want, they have learned to keep the gap within scoring distance.

Hedrick will look to add more numbers to her already outstanding first season as a Wildcat this weekend. She is currently second in the Southland with her hitting average of .466.

Teammates Taylor Brown and Kaleigh Singleton also are second and third in the Southland in fielding. As long as the Wildcats can pull their offense and defense together, the three-game series could be just what ACU needs to improve their conference standings.

The SHSU Bearkats are faring a little better in conference with a record of 4-12.

They are coming off a non-conference win against Texas Southern University where they shut down a rally by TSU and took the game 6-5.

Bearkcats pitcher Meme Quinn struck out three batters in five innings, so look for her to try several change-ups on the ‘Cats to try and shut them down.

Sam Houston State isn’t afraid to make sacrifice plays either, especially in late innings. Catcher for SHSU Tiffany Castillo earned her fifth homerun of the season in their game against TSU. Look for her to try to earn her sixth in the series against the ‘Cats.

Seidel said hitting will be the key in defeating SFA.

First pitch is set for 3 p.m. Friday in Huntsville and the second game will follow immediately.