By Savanah Silva
Posted on April 21, 2015 | Sports | Comments Off on Softball takes final game from Bearkats 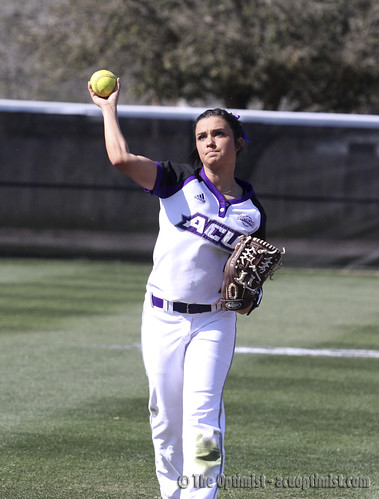 Freshman infielder Peyton Hedrick added to her already outstanding first season with the Wildcats and was named a finalist for the NFCA freshman of the year. Hedrick slammed two home runs in the series.

Game 1 of the series against the Bearkats was close, but SHSU would take the win by one run. ACU came out swinging, putting SHSU down three runs in the second, but the Bearkats rallied back and took a 5-4 victory over the ‘Cats.

Senior pitcher Emily Seidel took the loss, giving up five earned runs in as many innings.

Sophomore outfielder Taylor Brown and Hedrick helped put up ACU’s first three runs with RBIs in the second. Brown’s triple was her ninth of the season, leading the Southland Conference in the category.

“Coming off of the first loss, we just wanted to regroup and try and pull together for the next game, get something rolling in the next game to try and score some more runs,” Hedrick said.

Game 2 of the Friday doubleheader was another close one, but the Bearkats took the win.

Though the Bearkats scored the same amount of runs to take the second game, 5-2, the Wildcats couldn’t answer against SHSU pitcher Haley Baros.

ACU scored one in the first inning, and their second and final run on the night didn’t come until the seventh. Brown went two-for-four with two singles and two stolen bases, one of which led to a run.

Barnhill scored in the seventh off an RBI single by teammate and fellow freshman infielder Baylee Travers.

Junior transfer pitcher Julia Montoya held the Bearkats scoreless until the third when sophomore Sarah Allison slammed a three-run bomb for the Bearkats that opened the floodgates on the ‘Cats.

Seidel commanded the mound for six complete innings, giving up two runs, just one of them earned. Montoya came on in relief in the seventh, shutting down the Bearkats to seal the victory.

The Bearkats took a 1-0 lead in the fifth on a sacrifice fly, but ACU stayed focused and scored all three of their runs between the seventh and ninth innings.

The final game went into extra innings after Hedrick cracked her 10th home run of the season to give the ‘Cats a 2-1 lead. In the bottom of the seventh, the Bearkats answered with a leadoff double that turned into a run when ACU made two overthrows in one play.

Montoya then came in and pitched her way out of a two-on, two-out jam to end the inning with a tie score.

Both offenses were retired in the eighth, but speedy pinch hitter and sophomore outfielder Lakin Carpenter reached first on a bunt single to start the ninth. She made her way to third on back-to-back ground balls, then Barnhill slammed the game-winning hit to bring Carpenter home.

The Bearkats almost rallied in the bottom of the ninth, but could not cross the plate. Montoya earned the win for the Wildcats with a 3-2 final score.

The ‘Cats will be back home this weekend with another three-game series against Texas A&M-Corpus Christi, which will also be their last of the 2015 season at Wells field.

“We are continuing to work hard and try to end on a good note,” Hedrick said “Staying focused, and working to take one game at a time.”

First pitch is set for 4 p.m. Friday with the second game to follow immediately after. Saturday’s 12 p.m. game will also be Senior Recognition Day and the last home game of the year.