By Savanah Silva
Posted on April 6, 2015 | Sports | Comments Off on ‘Cats drop two against rival Cards 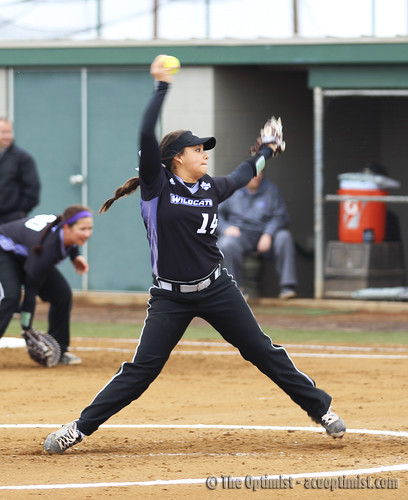 Softball hit the road this Easter weekend and traveled to San Antonio to face off against the Incarnate Word Cardinals.

The Wildcats came off a series loss to McNeese State, falling in two out of three games. Though the Cardinals hadn’t won a game in conference play, they came out strong in the first few innings but would quickly get shut down by senior pitcher, Emily Seidel. She struck out three through seven innings which would help get the momentum rolling for the ‘Cats.

ACU would make a statement with a five-run second inning. The Wildcats made it a 6-0 game in the fourth off of an RBI base hit up the middle by freshman infielder Alyson Bishoff. Teammate and outfielder Brianna Barnhill led the Wildcats in game one with a career-high three hits.

Seidel got her second career complete game shutout in the 7-0 victory of game one against the Cardinals.

Game two started off the same way the first game ended, with the Wildcats jumping ahead of the Cardinals,. but unfortunately would end in UIW’s favor.

ACU started junior pitcher Julia Montoya, and she would get the first out easily off a ground ball to first. But soon after, the floodgates would open on the ‘Cats, starting with a pinch-hit single to right field by Cardinals star pitcher, Brooke DuBois.

The fifth saw a handful of consecutive errors made by ACU, which made them lose the lead.

In their final at-bat in the seventh, the Wildcats got a two-out triple from sophomore outfielder Taylor Brown, who would finish the game three-for-four. But the second game ended 7-3 and gave UIW its first conference win.

The final game of the series saw Hedrick and fellow freshman infielder Holly Neese slam back-to-back home runs in the first inning, but that would be all the ‘Cats could score as the Cardinals shut down ACU’s offense.

The third inning would see UIW dominate, with them getting an eight-run lead on hits and more errors to make the score 10-2.

ACU would record just one more hit off of Hedrick but that would be it for the Wildcats. They would not come close to scoring again after that.

Incarnate Word would take the third game in convincing fashion with a 10-2 run-rule win.

This loss drops the Wildcats to 3-12 in conference and 7-26 overall.

ACU will be back in action Wednesday with a double-header against neighbor Hardin-Simmons. First pitch is set for 5 p.m.

With this many games back-to-back, Hedrick says head coach Bobby Reeves pushes the girls toward one goal when facing teams with a short turnaround.

“Just to take the games, game by game, and to continue working hard and staying in the game all the way to the third one,” said Hedrick.

The Wildcats will continue conference play with a series against Stephen F. Austin, with a double-header Friday starting at 4 p.m.