By Collin Wieder
Posted on April 14, 2015 | Sports | Comments Off on Baseball suffers sweep to Islanders 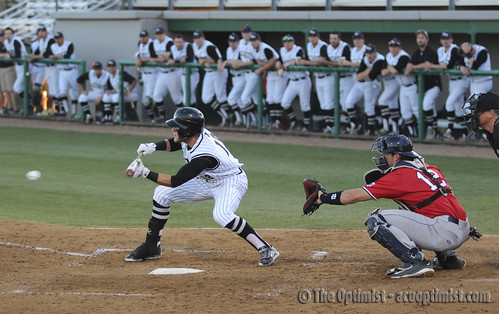 First baseman Tyler Eager says the team just needs to forget about the weekend and move on.

“Sometimes you just don’t play your best,” Eager said. “You have to learn to just flush it and move on to Tech and A&M.”

The Wildcats dropped a tough opener in Corpus as the Islanders won in walk-off fashion, 5-4. The ‘Cats and Islanders traded runs all game, but the ‘Cats had a chance to tie the game in the ninth inning, trailing 4-3.

Junior outfielder Heath Beasley would tie the game for the ‘Cats with a sacrifice bunt, bringing in junior infielder Kyle Carroll for the tying run. As the Wildcats went to the bottom of the ninth they brought in reliable saves leader, senior Kevin Sheets, to close out the game. Sheets would give up a double to start the inning and then follow it up with an intentional walk. He unraveled soon after, facing three more batters before giving up the game-winning single to drop game one.

ACU’s weekend seemed to follow in that order as they would drop Saturday’s game 12-2. The Wildcats were down 2-0 for four innings before the dam broke in innings five and six. The Wildcats pitching staff would give up three in the fifth and four in the sixth to let the game get away.

Starting pitcher Aaron Mason continued his rough start to the season losing his sixth game. The offense did not help the pitching staff much either as they recorded only five hits as a team

Sunday’s game sealed the Wildcats fate as they lost the series finale 8-1. The pitching staff gave up the game in two innings. The game was tied 0-0 but in the bottom of the third senior pitcher Thomas Altimont gave up four runs to give the ‘Ders a 4-0 advantage.

Head Coach Britt Bonneau said the team had a great game Friday but committed too many mental errors in the other two games.

“We played a really good game Friday and did some great things,” Bonneau said. “We just didn’t pitch the ball well the next two games and we weren’t able to do anything offensively either. Those are behind us now and we are getting ready for Texas Tech and Texas A&M.