By Collin Wieder
Posted on April 21, 2015 | Showcase,Sports | Comments Off on Baseball snaps losing streak in walk off fashion 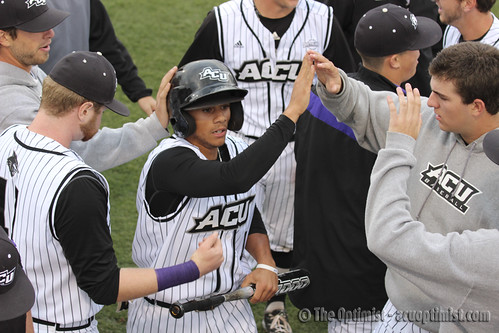 After freshman outfielder Taylor Fajardo sent the game into extra innings with a two-run homer to tie the game in the bottom of the ninth, junior shortstop Kyle Carroll needed just one pitch to give the Wildcats a one-run win with a solo home run to win the game, 3-2.

Head coach Britt Bonneau said the team felt the significance of the win on Sunday.

“It was a big weight off our shoulders; we’ve lost a lot of one-run games lately,” Bonneau said. “Nothing really has been going our way, so it felt good to get a win.”

The series didn’t get to start Friday as the game was delayed due to rain. Instead, Saturday featured a double-header. Game One, the Wildcats would record their third straight one-run loss as they fell to the ‘Kats, 6-5.

The Wildcats held a 5-2 lead after three innings behind a combined four RBIs by freshman left fielder Marcelle Carter and sophomore third baseman Aaron Draper. The Bearkats answered, cutting into the Wildcats’ lead with a run in the fourth. Sam Houston would complete the comeback in the fifth and take junior starting pitcher Garrett DeMeyere out of the game with two runs to tie the game.

Freshman Drew Hanson took over on the mound and pitched four scoreless innings to maintain the 5-5 score. But the Bearkats finally earned a run off Hanson on an RBI single in the top of the ninth. Junior pitcher Nick Palacios entered and retired the final two batters, but ACU’s bats could not score in the bottom of the inning, ending the game at 6-5.

Game Two did not go well from the beginning for the Wildcats as Sam Houston scored three runs in the first inning. SHSU added three more in the sixth to put the game out of reach as starter Logan Boyd would not relinquish a run to the ‘Cats until the sixth. The Bearkats added two more runs in the seventh to make it a dominating 8-2 win in the second half of the double-header.

Sunday’s game showcased a pitchers’ duel involving senior Thomas Altimont. ACU and SHSU would battle in four straight scoreless innings before Sam Houston took the lead in the fifth with a solo home run. The Bearkats would add another in the eighth to set the stage for a great comeback in the ninth.

Senior Kevin Sheets put up a zero in the top of the tenth, giving the Wildcats a shot to win in the bottom of the inning.

“We had some luck go our way,” Bonneau said. “With Fajardo hitting a home run, we were able to get one up in air again in the bottom of the tenth.”