By Collin Wieder
Posted on April 23, 2015 | Sports | Comments Off on Baseball looks to win against lowly ‘Jacks 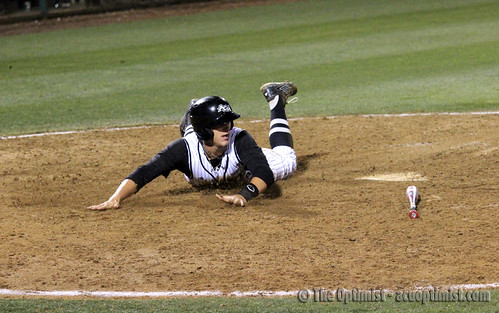 Baseball hopes to climb out of a slump that has the team sitting at 1-9 over their last ten games.

ACU baseball will travel to Stephen F. Austin University Friday for the chance to move up to the middle of the Southland Conference standings.

The Wildcats enter this weekend’s three-game series with an overall record of 9-29 and 7-11 in the Southland. SFA comes in with a 13-26 overall record and a 7-13 conference record.

ACU is coming off a 10-2 loss on Tuesday against Texas Tech University in Midland. ACU is now 0-3 against the Red Raiders on the season.

The Wildcats kept it a tight 2-2 game for seven innings behind the pitching of seniors Nate Cole and Kevin Sheets. The performances proved fruitless as reliable senior reliever Ladgie Zotyka got rocked in the bottom of the seventh for seven runs. The Red Raiders tacked on one more to get their 26th win of the season with a score of 10-2.

“We played really well until the bottom of the seventh,” said Britt Bonneau, head coach. “We threw the ball around too much, and that got the ball rolling downhill. We just didn’t make the plays in the field we had to make to stay in the game or win it.”

The pitching staff has given up 26 runs in the last four games and will look to climb out of its recent slump, a lot of which has been the result of throwing errors.

The ‘Cats’ bullpen should look to continue their strong play this season behind junior Nick Palacios, Sheets and Zotyka. Sheets leads all pitchers in ERA (2.22) in 16 appearances made, Palacios leads in appearances at 18 with a 2.41 ERA, and Zotyka is not far behind with 2.59.

They should find success against the 11th-place Lumberjacks, who are hitting a mediocre .256 at the plate.

The first pitch of the series is at 6 p.m. Friday.