By Collin Wieder
Posted on April 16, 2015 | Sports | Comments Off on Baseball drops two against Nations’ best 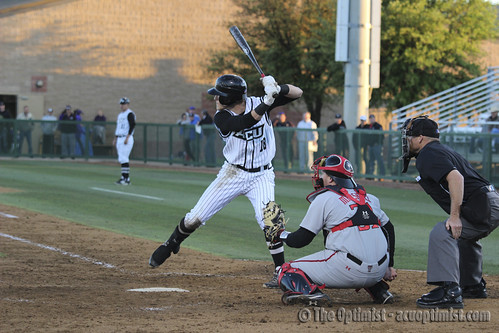 ACU baseball couldn’t catch a break this week as they dropped two games to two top-25 opponents, Texas Tech and Texas A&M, by just one run.

The Wildcats started off the week with a rematch against the Texas Tech Red Raiders Tuesday in front a crowd of about 1,600. ACU lost to the Red Raiders earlier in the season 6-5 after a thrilling 16-inning game.

Tuesday’s matchup featured a back-and-forth game as ACU and Tech traded zeroes in the first and then two, two-run innings in the second and third inning. Tech would finally take the lead with a two-run fifth inning.

The Wildcats struggled to close out innings as they gave up four runs on the night in two out situations.

The ACU bats would answer with a Taylor Waters’ RBI in the sixth to cut Tech’s lead to one.

ACU’s bullpen didn’t give up a run for three innings but could not hold off Tech in the top of ninth. The Red Raiders added a run to cushion their lead heading into the bottom of the ninth.

Down 7-5 ACU started off with Waters flying out to the infield. The bats would rally them back as freshman infielder Marcelle Carter would bring in senior first baseman Tyler Eager to cut Tech’s lead back to one. The ‘Cats loaded the bases with one out on the board.

Junior catcher Alex Copeland didn’t bring in any runs as he fouled out, and senior outfielder Colton Hall flew out to give the Tech a 7-6 win. 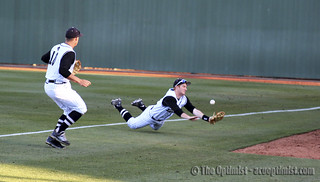 “I thought we played right there with them,” Bonneau said. “I thought that the way it ended with bases loaded that we had a chance to beat them.”

Wednesday’s game featured a pitcher’s duel between ACU and the No. 1 Texas A&M Aggies.

The offense managed only four hits on the night but were timed well enough to give the top-ranked Aggies a scare.

Through three innings, the Wildcats were tied with the Aggies, 2-2. The two teams followed up those innings with three straight zeroes on the board.

The ‘Cats turned to their two most reliable relievers in the bullpen to finish the game.

First up was senior Kevin Sheets. Sheets entered in the sixth and put up a shutout inning, but in the seventh, the Aggies were too much and snuck in the game-leading run.

Senior Ladgie Zotyka put up a shutout eighth inning to keep the ‘Cats within one heading into the final inning.

Marcelle Carter singled to get on base to open the inning. Junior Heath Beasley pinched hit for right fielder Chris Altimont but struck out swinging. Carter made it an easy second out for the Aggies as he was caught stealing at second. Alex Copeland grounded out to give the Aggies a 3-2 win.

The Wildcats dropped to 8-26 on the season heading into a three-game home series against the Sam Houston State Bearkats.