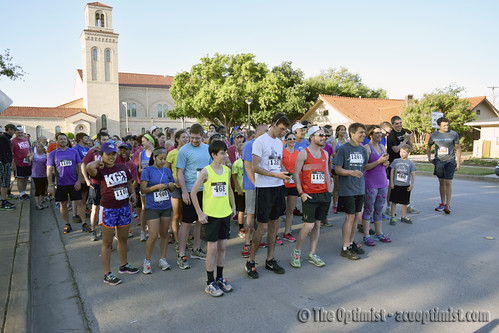 Sun and a light breeze greeted runners Saturday morning as the 32nd annual Kirk Goodwin Run kicked off another year of charity runs.

This year, students from Hardin-Simmons University, faculty, staff and community members participated in the KGR in support of the cause.

The KGR is one of Abilene’s most well-known 5Ks, along with the Run The West half marathon. These two events draw out hundreds of runners each year, and all proceeds go toward a specific cause. The KGR was started in honor of Kirk Goodwin.

Goodwin was a member of Galaxy men’s social club in 1983 and was also a member of the track team. Goodwin died in a car accident in 1984, and Goodwin’s social club brothers rallied behind his family in support. They organized the Kirk Goodwin Victory Run to help his family pay for medical bills.

Since then, the KGR has been an annual event with the goal of helping families with outstanding medical bills, much like Goodwin and his family dealt with.

Last year’s run raised over $13,000, so this year had high expectations.

Spencer Woolfolk, junior marketing major from San Antonio and president of Galaxy, was in charge of fundraising this year.

“The hopes for the race are the same each year; we want to continue to bless anyone we can financially, as well as remember the legacy of a great man,” Woolfolk said. “I cannot accurately express how profound the impact is on young men to be able to pour out all you have in order to solely bless others. We are excited and humbled to be able to raise money for others, but I believe the biggest blessing happens internally.”

Goodwin was Woolfolk’s father’s best friend, which is why this race means more to him than just raising money.

“It humbles me to watch the care and dedication that our guys pour out for the race, so in a way this is a way for me to honor my father’s friend as well,” Woolfolk said.

This year’s event took a year to plan, and almost every member of Galaxy was involved.

With over 300 runners, race coordinator Jason McVey said he sees the KGR as something not only for the men of Galaxy to be proud of, but for the ACU community as well.

“It’s one of our longest-lasting traditions, and it is incredibly rewarding to see the gratitude of those that the race helps,” said McVey, senior business management major from Austin.

Mary Kate Rotenberry, sophomore sports management major from Abilene, was one of hundreds of runners that participated Saturday.

“This race is a way for students to give back and help touch the lives of others like Kirk did,” Rotenberry said.

The official amount raised has not yet been released.