Wildcats come up short to No. 5 Texas Tech in 16 innings

By Collin Wieder
Posted on March 5, 2015 | Sports | Comments Off on Wildcats come up short to No. 5 Texas Tech in 16 innings 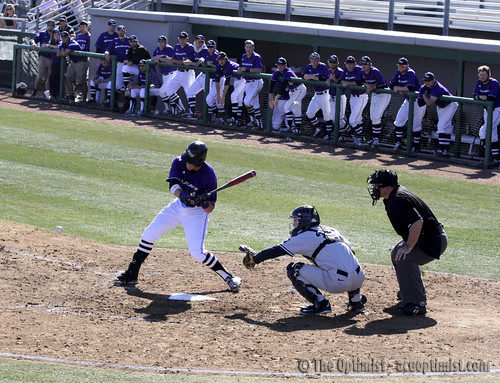 ACU baseball will return home Tuesday to start conference play after an impressive showing in Lubbock.

The Wildcats lost 6-5 in 16 innings to the No. 5 Texas Tech Red Raiders. Head coach Britt Bonneau said the team will always think about this game and it is impressive they competed with such a great team.

“To go in and battle the number five team in the country is something that we will always remember,” Boneau said. “We knew that no matter what happened in the game, we were going to take something from it. To be where we want to be one day, you have to play those types of teams.”

The offense started off the day hot as Aaron Draper, sophomore infielder from Plano, got the game going in the third inning with an RBI single. The Wildcats’ bats would add two more runs to end the inning up 3-0.

Thomas Altimont, senior pitcher from Southlake, put up three straight scoreless innings until the Red Raiders came alive, scoring two runs in the fourth and two in the fifth to take the lead, 4-3. ACU’s bullpen would keep the Wildcats in the game by pitching 10 straight scoreless innings with Kevin Sheets, senior from Brier, Washington, pitching four of those innings and recording five strikeouts. Sheets has had a strong start to the season pitching 10.1 innings and allowing only two earned runs.

ACU’s offense became stagnant throughout most of the game until the top of the eighth when Tyler Eager, senior first baseman from Fort Worth, singled in Aaron Draper to tie up the game at four runs apiece.

The Red Raiders and Wildcats would then go on a seven-inning pitching duel yielding no runs on either side. Tech came close in the 15th with a bases-loaded one-out jam, but the Wildcats found a way to get out. Alex Copeland, junior catcher from Broken Arrow, Oklahoma, finally put the Wildcats in the lead with his first hit of the day bringing in freshman infielder from Fair Oaks, California, Brayden Gomez in the top of the 16th.

In the bottom half of the inning, the Texas Tech offense became too much to handle as pinch hinter Hunter Hargrove drove in the tying run. Pinch hitter Ryan Long would then drive in Hargrove for the walk-off win in Lubbock.

Draper said the team enjoyed taking it to a top-ranked team in the nation.

“It was great; Texas Tech is an awesome team in the top 10,” Draper said. “Taking them to 16 innings was great obviously, but we would liked to have gotten the win.”

The tough loss dropped the ‘Cats to 0-7. ACU hosts the 7-4-1 Nicholls State Colonels this weekend to kick off the Southland season. Nicholls started off the season well so far beating Utah three times and LSU once.

First pitch will be at 6 p.m. Friday at the Crutch.