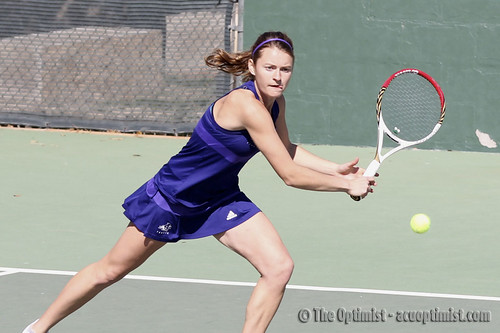 The men’s tennis team won both its dual matches on Saturday against McMurry and the University of the Southwest. The Wildcats impressed many this weekend, with a 6-1 win over McMurry and a 4-0 victory over Southwest.

In the singles matches against the University of Southwest Mustanges, ACU swept the first three singles matches with sophomore Nico Agritelley, junior Jason Proctor and freshman Henry Adams leading the victories. This caused the other matches to become unfinished.

In doubles competition against the Mustangs, ACU swept all three of its matches. However, one was left unfinished due to the three consecutive singles wins. Sophomore Nico Agritelley and freshman Henry Adams won their match 6-2 as Senior Guilherme Gesser and junior Marco Bensley won their match 6-4.

The women’s started started the weekend off strong with a win against Tyler Junior College, 6-1. ACU swept five of the six wins in singles competition and all three wins in doubles competition.

However, ACU’s strong success and undefeated record was broken in the match against Southland Conference opponent, Northwestern State. Freshman Whitney Williams and junior Nada Marjanovic contributed to ACU’s only wins in singles competition.

Carrying over to doubles, freshmen Lucile Pothier and Carli Knezvich were the only winning duo as they won 8-4. The Wildcats currently stand 6-1 overall and 2-1 in conference play.

ACU tennis will be back on the court this weekend as the women compete at home against Southeastern Louisiana University.

The men’s team will resume play April 3rd against Nicholls State on the road in Louisiana.