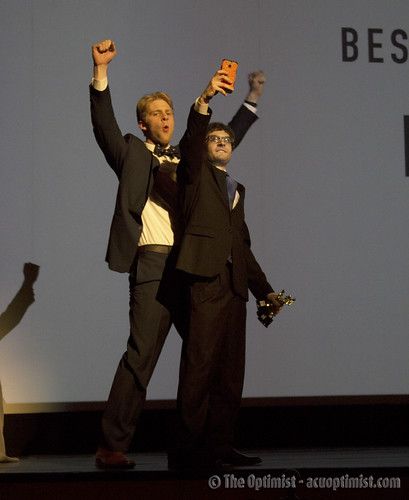 The university conducted its 11th annual FilmFest Gala Friday night, and the event featured 10 films that showcased the range of talent and experience among ACU’s students.

“FilmFest is an amazing opportunity for filmmakers and artists around ACU,” said Curtis, junior English major from Brownsville. “The best part is the judges that the team gets to bring in. To be able to hear feedback from the judges is wonderful, and they really take the time to help you grow as a filmmaker.”

Epic, a crowd-pleasing comedy, swept three awards categories: best picture, best director (Tim Holt) and best actor (Caleb Pierce). The film’s central theme is about being epic and making the most of your circumstances.

“This is such an encouragement because my dream is to be an actor,” said Pierce, senior musical theatre major from Coppell. “It’s great having this affirmation along the way.”

Alikay Wood, executive producer of FilmFest, said the purpose of the event is to provide a creative outlet for students interested in film.

“It then provides these students the opportunity to share this work with their peers and be recognized,”said Wood, senior English major from Sacramento, California.

Several other films were screened during the event, including:

“The whole experience is hands-on and provides an awesome learning opportunity for students,” Wood said.