By Savanah Silva
Posted on March 17, 2015 | Sports | Comments Off on Lamar sweeps ‘Cats in softball 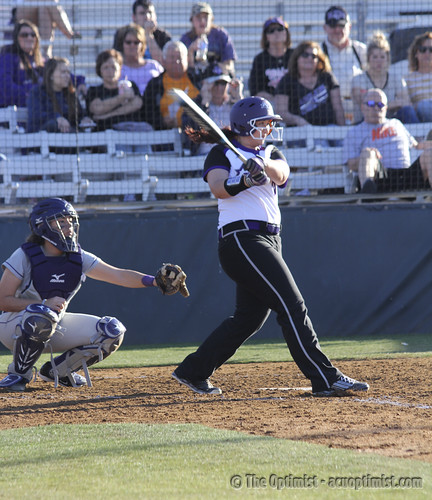 The ACU softball team travelled to Beaumont last weekend to take on the Lamar Cardinals in a three-game conference series.

The Wildcats, who are now 1-5 in conference and 4-18 overall, dropped the first game of the series 1-13. ACU scored the game’s first run on an RBI single from freshman infielder Peyton Hedrick, but it would be all Cardinals from then.

In the second game, the ‘Cats would come out strong thanks to senior pitcher Emily Seidel. Seidel helped the Wildcats take a 4-3 lead in the final inning of the game, but the Cardinals capitalized off of ACU’s mistakes in the late going.

Lamar put their first two runners on base thanks to a walk and an error made on a bunt attempt, but ACU scored first thanks to a bases-loaded walk.

Junior catcher Cara Hoover hit a game-tying pinch hit RBI in the fifth, allowing the ‘Cats to take a lead in the sixth when sophomore outfielder Taylor Brown scored on an RBI thanks to teammate Holly Neese.

The Cardinals took game two 5-4 after scoring two runs in the bottom of the seventh to take the game.

Sunday, the Cardinals led the ‘Cats and hoped to finish it off the series with a sweep.

Seidel pitched an outstanding six-inning complete game with seven strikeouts. However, she had three straight walks to begin the second inning that eventually set the stage for a six-run inning by the Cardinals.

Lamar had errors as well which ACU took advantage of.

Starting pitcher for the Cardinals, Lauren Napoli, held the Wildcats until they erupted for four runs in the fifth inning. Junior infielder Demi McNulty ended the fifth with an RBI single to the shortstop allowing the ‘Cats to receive their final point of the game.

ACU was swept by Lamar with the final game in the series going to the Cardinals 7-4.

Despite the score, Hedrick thought the team played well.

“Overall, we played very good this past weekend against Lamar,” she said. “Offensively and defensively, we had a great two days.”

The ‘Cats will be on the road once more to face off against UT-Arlington Tuesday in a non-conference game. Conference play will begin again this weekend at home against University of Central Arkansas.

“Our goal going into this weekend against UCA is to pull offense, defense and pitching together and come out with a win,” Hedrick said.

The three-game series against UCA will begin at 4 p.m. at Wells field.