By Savanah Silva
Posted on March 31, 2015 | Sports | Comments Off on Cowgirls wrangle the Wildcats 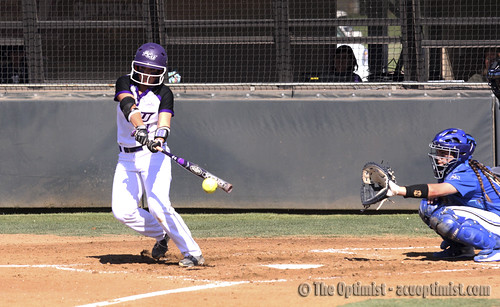 The Wildcats fell in games one and three against McNeese, 8-0 and 13-6. ACU did come back in game two however with an 8-2 win.

Coming off a disappointing loss to University of Texas at Arlington, the ACU softball team came into last weekend’s home series with some fire when it faced off against McNeese State.

The ‘Cats were looking to hand the Cowgirls their first loss in conference play in the first match of the series.

McNeese entered the weekend with the lowest team ERA in the Southland Conference, which was reflected in the final score of the first game.

The Cowgirls came out swinging with pitcher Emily Vincent holding the Wildcats to almost no hits.

Sophomore catcher Kaleigh Singleton snapped the no-hit curse after she grounded one to the shortstop to start the seventh.

Two outs later, sophomore outfielder Taylor Brown slammed one to shallow left field to load the bases, but Vincent got freshman infielder Peyton Hedrick out to end the game.

Senior pitcher Emily Seidel had a solid three innings of shut-out work, but the Cowgirls started hitting in the fourth and brought in five runs before junior pitcher Julia Montoya came in.

McNeese scored its eighth and final run of the first game in the seventh to make the final score 8-0.

Montoya started the second game strong, though McNeese came out swinging, quickly jumping to a 2-0 lead in the third. That was all they could do off Montoya, who followed their rally with four scoreless innings.

The ‘Cats never lost their intensity and responded to McNeese’s two runs with eight of their own throughout the game. That included a three-run home run by Hedrick, who went 2-for-3 at the plate.

ACU capitalized on McNeese’s mistakes, which helped push them to hand the Cowgirls their first loss in conference play. The Wildcats took Game 2, 8-2.

“Julia went out there and threw strikes, got ahead in the count and spun the ball to get us a lot of pop-ups,” Reeves said.

Going into Saturday’s final game of the back-and-forth series, ACU was looking to take back-to-back wins against McNeese.

Once again, Hedrick improved her batting average when she crushed two more home runs. She also had four RBI which helped push her to a .452 hitting average. Unfortunately, it wasn’t enough for the ‘Cats.

Starting pitcher for the Cowgirls Rachel Smith helped seal the game in the seventh with her second home run of the game. ACU only scored six runs before McNeese pulled away in the seventh.

Montoya started for the Wildcats but took the loss after giving up six earned runs through 3.0 innings of work.

The Wildcats travel to San Antonio this weekend to play the University of the Incarnate Word in another three-game series. First pitch is at 4 p.m. Friday.