By Collin Wieder
Posted on March 17, 2015 | Sports | Comments Off on ‘Cats can’t tame lions in Louisiana 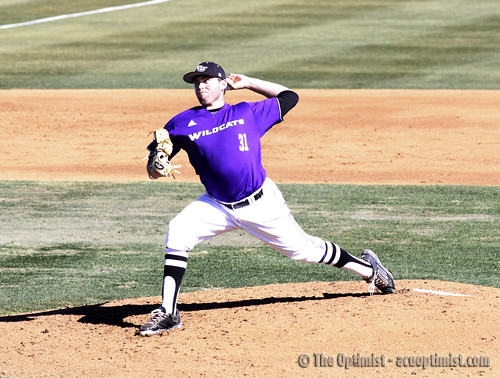 ACU baseball took a huge leap toward competing against the best of the Southland Conference last weekend. The Wildcats, 2-13 (2-4), lost a tough series to the Southeastern Louisiana Lions but won 9-2 Saturday against the 15-6 (4-2) Lions team that made the NCAA Tournament in 2014.

Head coach Britt Bonneau said he though the weekend went well despite losing the series.

“Overall, going to Southeastern Louisiana, which is a place we have never been to, and playing a team that reached the regional finals and getting a win is huge for our program,” Bonneau said.

The Wildcats dropped the first game of the weekend by a score of 11-3.

Garrett Demeyere, junior pitcher from Benbrook, had his first rough outing of the season giving up eight earned runs in five innings of work.

Tyler Eager, senior first baseman from Fort Worth, turned in the best batting performance of the series for the Wildcats going 4-for-5 at the plate.

ACU followed up the disappointing loss with the emphatic 9-2 win on Saturday.

The Wildcats were tied at 2 heading into the top of ninth inning when the Wildcats’ offense took over. The offense scored seven runs on five hits and two errors giving them a nice lead heading into the bottom of the ninth. Kevin Sheets, senior pitcher from Brier, Washington, entered the game and would not give up a run giving the Wildcats their second Southland win of the season.

Aaron Mason, junior transfer pitcher from Broken Arrow, Oklahoma, put together his best game so far this season giving up only one earned run on 5.2 innings of work.

“I thought Aaron Mason did a great job of keeping us in the game, and we just kind of hung around and then had a big ninth inning,” Bonneau said.

Ladgie Zotyka, senior pitcher from Wallis, picked up his first win of the season as he put in 1.1 shutout innings of work.

Freshman utility player Marcelle Carter came up big for the ‘Cats going 3-for-4 with two runs scored and one run batted in.

ACU, however, closed out the weekend on a tough loss as they were dominated 11-0 Sunday. The Wildcats managed only two hits on the night, one from sophomore infielder Aaron Draper and the other from Eager.

Thomas Altimont, senior pitcher from Southlake, continued his tough start to the season as he dropped to 0-4 after a three-inning four-earned run outing.

The lone bright spot from the pitching staff came from junior from Banderas Nick Palacios who recorded an eight-pitch shutout inning.

The Wildcats have struggled at the plate this season as only three players are hitting above .250 right now.

“We have a lot of guys who are hitting the ball hard but just aren’t getting on base,” Bonneau said. “It has been a challenge for us offensively, and that can range from a lot of things, but we are going to continue to adjust.”

The ‘Cats return to the diamond to face Alabama A&M for their second game of the series at 2 p.m. Wednesday.