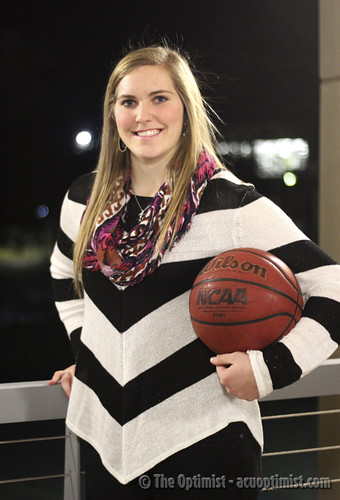 Shelstead has played in all of the Wildcats' games over the last two seasons. The 'Cats are 29-21 over than span.

The second-year center has played an important role in ACU’s transition to Div. I.

Shelstead came to ACU after a prestigious high school career at Mineral Wells High School. She performed well on the court, leading the Rams to a 24-10 season and an area title while averaging 21 points per game and 12 assists per game. She was awarded Co-District MVP and given all-region honors as well. Shelstead also performed well off the court, graduating from MHS in the top 10 percent.

Her love for the game of basketball came at an early age from her parents.

“Well, both of my parents were college basketball players,” Shelstead said. “I have had a basketball in my hands since I was born, and I played select basketball since third grade.”

The sophomore decided to attend ACU over multiple Southland rivals.

“I committed way before I even came to Mineral Wells,” Shelstead said. “I committed my junior year, and I had a lot of schools coming for me like Southeastern Louisiana and Central Arkansas. When I came to ACU I visited and I wanted to come to a small, Christian school.”

Shelstead came in last year with an impressive freshman class that featured key players Alexis Mason and Lizzy and Suzzy Dimba. The team has relied heavily on these four players as they have played in every game since their true freshman season.

She put together a solid freshman season, scoring 7.4 points per game and 4.6 rebounds per game. She also put in solid academic work, being named to the Southland Conference Commissioner’s Honor Roll.

“Honestly, I think we had to mature a lot because being freshman coming in we had to play a lot of minutes from the beginning,” said Shelstead. “I think that since we kind of had to take the majority of the team, we had to really mature and we started playing well together.”

She became one of the centerpieces of the Wildcats’ improvement under head coach Julie Goodenough this season by pulling down 9.0 rebounds per game. Shelstead has also become a dominant player in the post by recording seven double-doubles through 20 games. The sophomore credits Goodenough with the team’s chemistry even though they are young.

“Coach Goodenough has made it so team-oriented even though we are young,” Shelstead said. “She recruits good players and we have learn to play together.”