By Collin Wieder
Posted on November 13, 2014 | Sports | Comments Off on Wildcats look to avoid first losing season since ’05 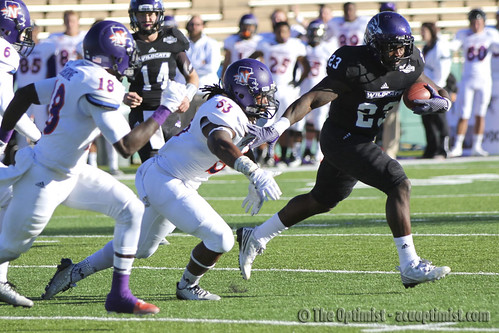 Running back Herschel Simms looks to cut outside against the NSU defense in Shotwell Stadium.

SFA has won two out of it’s last three games against top-10 opponents. The Lumberjacks defeated then No. 8-ranked McNeese State last week 31-16 and previously ranked No. 8 Southeastern Louisiana, 27-17.

The Wildcats have not had a losing season since the 2005 season where they went 4-6 while they were still in Division 2. To keep that above-.500 streak alive, they will need to play a cleaner game than last week where they turned the ball over five times.

“I love where we are as a team, but we are hit-and-miss on Saturdays still,” said Ken Collums, head coach. “From time to time we play really good, but there are times when we give the game away with turnovers. We have gotten into a rut here lately where we haven’t played well.”

Quarterback Parker McKenzie struggled in back-to-back starts for the first time all year. McKenzie turned the ball over three times against Sam Houston and four against Northwestern State. Kade Munden will continue to be used and will be used more in the passing game this week.

The running game has regained Herschel Sims after he was limited for the last two weeks but may have lost freshman De’Andre Brown who left last week’s game with an undisclosed injury.

Stephen F. Austin brings a balanced offensive attack featuring one of the nation’s top running backs in Gus Johnson. Johnson has 1,282 yards and 19 touchdowns on the ground this season.

The passing game features a young dual threat sophomore quarterback in Zach Conque, the son of SFA head coach Clint Conque. The sophomore has put together a great campaign so far, throwing for 2,123 yards, 11 touchdowns and seven interceptions while rushing for 442 yards and 12 touchdowns.

Clint Conque hired Collums onto his staff back in 2000 when Conque coached at Collums’ alma mater, Central Arkansas.

“I know him very well; he is a good friend of mine,” Collums said. “He is a good coach, and his guys will always be ready.”

The defense looks to finish out a solid first Southland season where they forced 24 turnovers and were among the top in the Southland in sacks. Defensive end Nick Richardson also finishes out his career this Saturday short of breaking the the ACU career sack record by 2.5 sacks.

Collums does feel the defense and the team has competed well this season in the Southland.

“It has been affirmed to me and everyone in the program that we are headed in the right direction,” Collums said. “We learned that we belong in this league.”