By Collin Wieder
Posted on November 8, 2014 | Showcase,Sports | Comments Off on Turnovers plague Wildcats, as Demons dominate 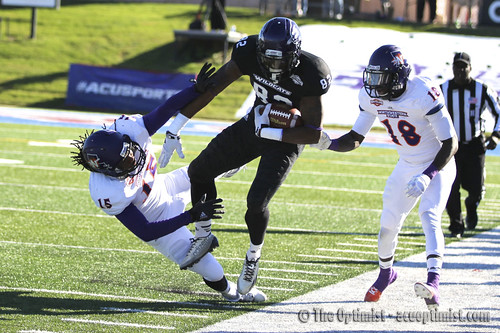 Junior wide receiver Cedric Gilbert is forced out of bounds in the Wildcats' game against Northwestern State. The Wildcats' offense struggled as they fell to the Demons, 34-10, in the final home game of the year at Shotwell Stadium.

The Wildcats fell 34-10 to the Northwestern State Demons in ACU’s final home game of the year.

The Wildcats dropped to 5-6 and 3-4 in conference while the Demons improved to 5-5 and 3-3 in the Southland Conference.

ACU started the game off well, recovering the opening onside kick, but two plays into ACU’s drive, quarterback Parker McKenzie threw an interception over the middle. The offenses would not score for most of the first quarter as they traded punts. The Demons would finally go on a drive that lasted nearly five minutes to break open the scoreless game 7-0. NSU would score 13 more unanswered points to end the half.

The Wildcats went from forcing seven turnovers to giving away the ball five times Saturday. Northwestern State took a 20-0 first-half lead and didn’t look back as ACU never got within more than 10 points of the Demons’ lead.

The Wildcat offense struggled mightily as they turned over the ball four times. McKenzie’s return from injury went poorly, as he threw three interceptions in the first half and fumbled on the NSU 1-yard line in the third quarter which ended the Wildcats long drive and momentum swing. McKenzie threw for 270 yards and one touchdown as well.

“It’s disappointing when you follow up a good win with a subpar performance,” said Ken Collums, head coach. “Over our last few games, we either play real clean or we turn the ball over a lot and that’s a lot of inconsistency.”

Quarterback Kade Munden led the team in rushing with 35 yards, as he was brought in several times to give ACU a different look at times. Running back De’Andre Brown added 27 yards and Herschel Sims had seven touches for 51 total yards. The receiving corps put together a decent game as junior Cedric Gilbert caught six passes for 65 yards and senior Demarcus Thompson caught five passes for 70 yards and one touchdown.

Linebacker Justin Stephens had a great senior day recording 13 total tackles and one sack. The defense as a whole compiled 2.5 sacks and eight tackles for loss but couldn’t stop quarterback Zach Adkins who looked comfortable all day. Adkins went 28-for-39 for 238 yards and a touchdown. Receiver Ed Eagan followed up his 238- yard performance last week with a record 13 catches for 126 yards.

“This is a bummer for the seniors you know they were fired up and wanted a win here in Shotwell,” Collums said. “They paved the way for these other guys to take over.”