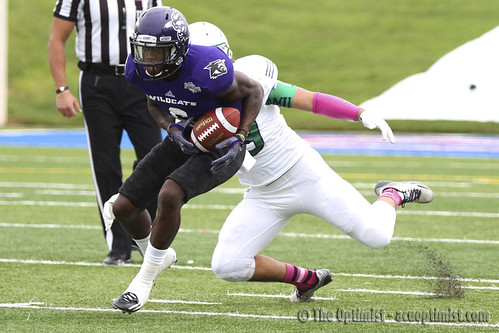 Senior wide receiver Demarcus Thompson has put together a great season so far statistically. Thompson currently leads the team in receptions (39) and yards (424).

McNeese looked to have a blowout on their hands as they took a 31-6 lead with 10:45 remaining in the third quarter. The Cowboys would not score again, as ACU clawed its way back into the game on the legs of freshman running back De’Andre Brown and an opportunistic defense.

Brown punched in a 23-yard touchdown run to make it 31-13 at the start of the fourth quarter. Cornerback Keith Barnett forced and recovered a McNeese fumble to give the Wildcats great field position. Quarterback Parker McKenzie brought the Wildcats within 11 points of the Cowboys with an eight-yard scoring toss to receiver Demarcus Thompson.

The Cowboys defense would prove too much for the Wildcats, as they couldn’t score again, giving MSU the win on their homecoming night.

The Cowboys outgained the Wildcats in yards, 507 to 255. McNeese pounded the Wildcat defense in the running game, as the Cowboys averaged 6.1 yards per carry on their way to 304 yards rushing. However, ACU did force six turnovers against a team that had only coughed the ball up five times all season long. The Wildcat offense only turned it over once on the night.

“We started off slow,” McKenzie said. “But credit to our defense for forcing six turnovers on the night.”

McKenzie had a rough night against the best passing defense in the Southland as he went 15-for-30 for 141 yards with one touchdown and one interception. Brown recorded his third 100-yard rushing game of the season as he carried 13 times for 109 yards and a touchdown. Cedric Gilbert led all receivers in catches (4) and in yards (74). Thompson recorded his first receiving touchdown of the season as well.

“We need to start fast,” Gilbert said. “The defense made stops, but then the offense is off, so we need to play all four quarters.”

“The bottom line is we didn’t play well enough on defense to beat a team like McNeese,” head coach Ken Collums. “Say what you want about forcing six turnovers, but a couple of those fumbles were after 12-15 yard runs. Teams for the next four weeks have good, athletic quarterbacks and good running backs we have to play better.”

The Wildcats will have another tough matchup on the road next week, as the team will travel to Huntsville to take on Sam Houston State University (3-4, 2-1).