By Collin Wieder
Posted on October 11, 2014 | Showcase,Sports | Comments Off on Football powers through Gyrenes for fourth win 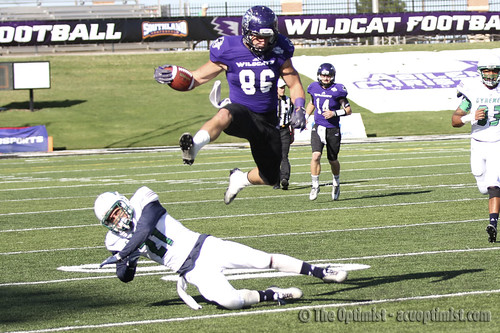 The football team scored more than 50 points for the second time this year on its way to a 55-14 Homecoming win against the Ave Maria Gyrenes.

The football team scored more than 50 points for the second time this year on its way to a 55-14 Homecoming win against the Ave Maria Gyrenes.

ACU improved to 4-3 overall on the year while the Gyrenes dropped to 1-5.

The Wildcat offense put together another great outing, going for 513 total yards.

The Gyrenes would not score again as the Wildcat defense shut down Ave Maria. The offense scored 38 unanswered points to finish the rout.

“The first half it wasn’t pretty,” said Ken Collums, head coach. “But the players played well. We just need to clean some things up.”

Sophomore quarterback Parker McKenzie started off rough in the first quarter, going only 4-for-10 for 64 yards, but rebounded to finish 22-for-31 for 304 yards and a touchdown. Junior receiver Cade Stone continued his great season as he had eight receptions for 121 yards and the only receiving touchdown. Tight end Noah Cheshier was second on the team in catches (five) and yards (60).

ACU’s run game was the story Saturday, as the team racked up 41 carries for 168 yards and six touchdowns. Junior running back Sims led the team in rushing yards with 86 and added a touchdown as well. Freshman De’Andre Brown rushed for 58 yards and three rushing touchdowns. Backups Randy Gober and Adrian Duncan also picked up a touchdown each during the 4th quarter.

“Me and Herschel are for real,” Brown said. “Once I leave the game and he comes in, we don’t miss a step.”

Ave Maria put 354 total yards of offense, most of which came in the first half. Clayton Uecher was the leading in rushing and passing for the Gyrenes. He carried six times for 47 yards and went 18-for-36 for 276 yards with two touchdowns and an interception.

Linebacker Justin Stephens led the Wildcat defense in tackles with 12. Defensive end Nick Richardson was second on the team in tackles with five and tackles for loss with two. Richardson recorded his sixth sack of the year putting him at 5.5 sacks, just four away from breaking the ACU career record for sacks.