By Collin Wieder
Posted on October 23, 2014 | Sports | Comments Off on ‘Cats battle ‘Kats for SHSU Homecoming 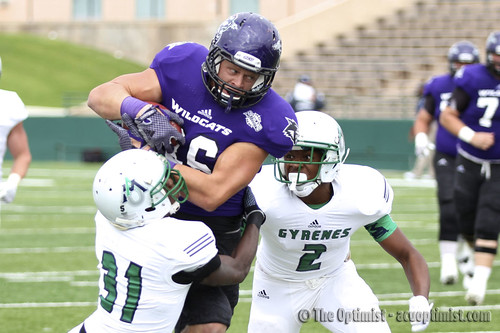 The ACU Wildcat football team will go on the road again this weekend to take on FCS perennial powerhouse Sam Houston State.

Sam Houston has had to battle against some major opponents this season. The Bearkats lost to the SEC’s LSU and the No. 2 FCS school in the country, Eastern Washington.

SHSU came into the season on the heels of a 34-10 stretch over the last three years, but has taken a step back this year.

“He is probably faster than Sams,” Collums said. “Sams probably throws the ball better, but he can score anywhere on the field; he’s done it against everybody. The key is to be in the right spot and to be disciplined with your pass rush and gap responsibilities.”

ACU’s offense comes into the contest off its least productive game of the season with only 255 yards of total offense against McNeese.

Sophomore quarterback Parker McKenzie threw for a season low of 141 yards under McNeese’s pressure. He will look to rebound with his talented receiving corps that features five men with 20 plus catches.

“They’re fast and big; we just have to execute,” Brown said. “Executing plays and doing the right things all the time will give us a chance to win.”

The Wildcats will play Sam Houston at 3 p.m. Saturday in Huntsville.