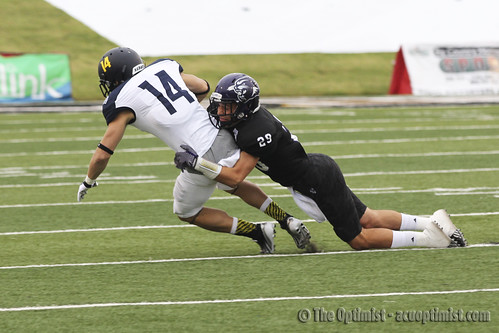 The football team suffered another heartbreaking loss Saturday night as it fell to the Northern Arizona Lumberjacks, 27-21.

The Wildcats’ home opener had just as much excitement as the team’s opening game against Georgia State did. The ‘Cats were down for most of the game but rallied late to make it a competitive end.

ACU’s defense made a stand late in the fourth quarter and forced the Lumberjacks to attempt a field goal. The defense blocked the 37-yard field goal, giving the Wildcat offense one last drive to score. ACU converted two third and longs to get into NAU territory. On a third down, quarterback Parker McKenzie was sacked to make it fourth and 17. With the game on the line, McKenzie scrambled out of the pocket but came eight yards short to end the game.

“We had our chance at the end, but unfortunately we just couldn’t get it done,” Collums said. “But we knew coming in that that is what NAU does. They’ll eat up the clock and keep the ball from you.”

ACU’s offense struggled for most of the game, but the running game found its stride after a rough first outing against Georgia State. Running backs De’Andre Brown and Herschel Sims ran efficiently all game. Brown carried the ball 14 times for 109 yards, and Sims carried the ball 10 times for 54 yards in his return to Shotwell.

“Me and Herschel are running faster, and the biggest difference between last week’s game is that we’re not running hesitantly,” Brown said. “We have a solid one-two punch going and it’s nice to know one of us can come out and the other pick up where we left off.”

McKenzie couldn’t carry over his success from his first start as he went 14-for-22 for 165 yards with two touchdowns and one interception on the night. McKenzie also rushed nine times for 14 yards and a touchdown.

Defensively, the Wildcats had a completely different game between the two halves. In the first half, the defense allowed 17 points, but in the second they allowed only 10 points, including blocking a field goal to give the Wildcats a chance to win. The Wildcats allowed 448 yards of offense, but they did force NAU to change the game plan and throw 42 times on Saturday.

“All week, Coach has been telling us that bad things will happen,” Brown said. “So when it did, we just had to sit back, take a breath and get back to doing what we do.”

Backup safety D.J. Arnold led the way for the ‘Cats, making 13 total tackles in his start for the injured Angel Lopez.

Defensive end Nick Richardson built on an already impressive year with 10 tackles and half a sack to help him climb up to 26 career sacks, just eight away from the ACU career record.

ACU heads to Troy, Alabama, Sept. 13 for its second FBS game of the year against the Troy University Trojans.