By Collin Wieder
Posted on September 21, 2014 | Showcase,Sports | Comments Off on Wildcats clobber Cardinals 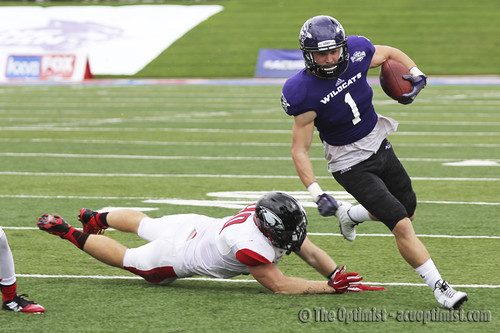 The win was the Wildcats’ first against a Southland Conference team since their return to the FCS.

ACU’s offense went for over 400 yards for the third game this season, including another multi-touchdown-pass game for sophomore quarterback Parker McKenzie. McKenzie went 21-for-33 for 329 yards and two touchdowns.

“I thought he did really well,” head coach Ken Collums said. “But he missed throws today that he didn’t miss in other games.”

The running game struggled without starter Herschel Sims and running back De’Andre Brown. The Wildcats relied on sophomore Adrian Duncan, who carried 20 times for 54 yards. Redshirt freshman running back Randy Gober also added 11 carries for 26 yards and a touchdown on the ground. The Wildcats even had to rely on tight end Jonathan Parker to carry the ball two times for 10 yards.

Special teams struggled on the rainy field with sophomore kicker Nik Grau missing three field goals on the day. Grau had not missed a field goal all year and had missed only one over his entire career entering play Saturday against the Cardinals. The kickoff team also allowed a 48-yard return in the game as well.

On the defensive side of the ball, the Wildcats allowed only 133 yards of offense and forced two turnovers from Incarnate Word. Freshman linebacker Sam Denmark was responsible for forcing both turnovers as he recorded the first two interceptions of his career.

“It’s incredible. I mean, you don’t get interceptions like that,” Denmark said. “And I only experienced that one time in high school.”

The team also had six tackles for losses including two sacks. Senior linebacker Lynn Grady led the team with nine tackles on the day. Incarnate Word was forced to punt eight times as the Wildcat defense gave up only 2.5 yards per play.