By Linsey Thut
Posted on September 21, 2014 | News,Showcase | Comments Off on Bid on It: Social Clubs initiate new pledges on Bid Night 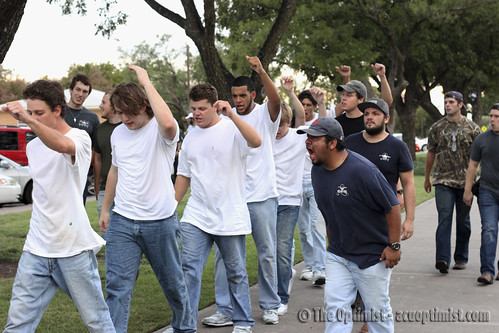 On Friday night, campus was filled with women skipping in single file lines wearing shirts with marker all over them and men carrying pictures of fruit and chanting about cows. No, the ACU campus did not go crazy; pledging kicked off with the time-honored tradition of Bid Night.

Throughout the night, a total of 388 students were welcomed, and initiated, by the 10 social clubs.

“I am super excited to watch the carp grow together and learn what it means to be in the brotherhood of Pi Kappa,” said Day, senior youth and family ministry major from Katy.

Galaxy is initiating 25 “Novas” this year and Trojans have 18 new “Slavs”. Gamma Sigma Phi will have 53 “Siblings” to prepare for Knighthood as Kinsmen.

Drew Ritchie, senior biblical text major from Lake Jackson, is president of GSP and said he looks forward to the pledging process.

“I am excited about the effort that the members of GSP have put into making this a memorable and valuable experience for the pledges,” he said.

Sarah Hendrix, president of Sigma Theta Chi, said she can’t wait to usher her 66 “Squigs” through the new pledging process.

Ko Jo Kai is inducting 67 new “Nu-nus” while GATA is giving a warm welcome to 69 “Flames,” the biggest pledge class of the year.

Kai Cremer, senior psychology major from Albuquerque, New Mexico, is president of GATA and said she already loves how on-fire for GATA the new pledges are.

“Just after a few days with them, the GATAs and I can see how amazing, fun and unique this group of flames are and how passionate they are about GATA,” she said.

Meghann McLeskey, president of AKO, said pledging is a blessing she’s excited to see others participate in.

“I know pledging was something that immensely shaped my walk with Christ, and I’m excited to see how He blesses our pledges through this process,” said McLeskey, senior nursing major from Burnet.