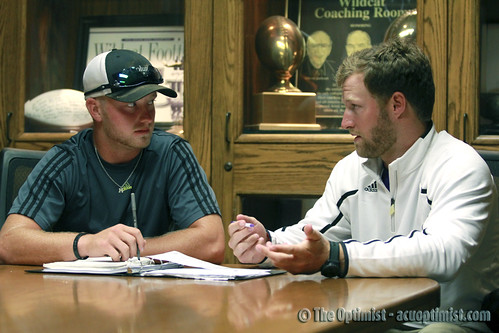 ACU football entered last season without four-year starting quarterback Mitchell Gale, leaving a question as to who could fill his shoes.

Such a question does not leave most football teams overly confident, but redshirt senior John David Baker gave the Wildcats the answer they needed. Compiling 40 touchdowns in 11 games last year, Baker put together a solid offensive season and showed that first-year starters can successfully lead a team.

Since then, Baker has been hired as a graduate assistant in the offseason, hoping to groom his successor. Baker will pass the torch to redshirt sophomore Parker McKenzie. McKenzie enters this season with little experience, having only played in five games and attempted only three passes last season.

Baker hopes to take McKenzie under his wing much like Gale did with him.

“When I played, I was fortunate to have Mitchell. He was like my mentor,” Baker said. “I don’t play anymore, but I still have the opportunity to do that for Parker.”

One difference for McKenzie is that he won’t have an experienced offense around him, whereas Baker entered last season with three returning receivers, an experienced running back and a strong offensive line.

The offense does, however, bring back all three tight ends from last season, and hometown hero Herschel Sims will fill in at running back after sitting out his transfer season.

“I was fortunate enough to have guys that had been playing here for a long time,” Baker said. “Parker is coming into a little bit different situation. Offensively, a lot of new faces, but they are talented.”

McKenzie may not have the experience, but he came to ACU with an impressive resume. He was a record-setting quarterback at Smithson Valley High School and started three years, setting the school record for career passing yards (4,679) and career total yards (4,962). Smithson Valley went 24-7 during McKenzie’s time at the helm, proof of past success that seems promising for the upcoming season.

McKenzie redshirted his freshman year as Baker backed up senior Mitchell Gale during the 2012 season. The following season, McKenzie surpassed redshirt sophomore Malcolm Ruben as backup to Baker. In spring of 2014, he officially won the quarterback battle and took over as starter for the season.

The team and their quarterback will be tested early on as they face two FBS teams in Georgia State and Troy, as well as FCS playoff team Northern Arizona.