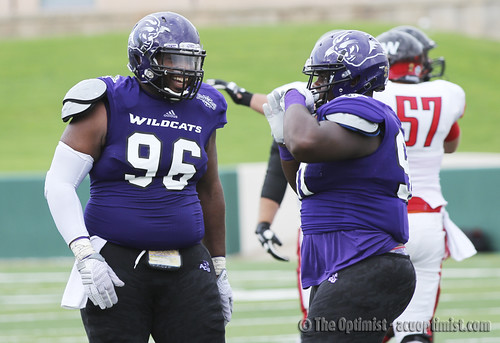 The Wildcats' defense will look to be a strong presence this year as they will welcome back a number of returning starters for the 2014 season.

ACU football’s first official season in Div. I begins with the first Div. I game of the college football season today at Georgia State University in the legendary Georgia Dome.

This season will also be the Wildcats’ first season in the Southland Conference. A tough schedule is ahead for the ‘Cats as they play multiple non-conference opponents in Troy, Georgia State, and Northern Arizona. They will also play three Southland opponents that had winning records last year in McNeese State, Sam Houston State, and Central Arkansas.

The Wildcats come into this season with the most inexperienced offense of the Ken Collums era. Collums will be replacing multiple skill positions with young players, but the Wildcats are not unfamiliar with replacing key competitors.

ACU entered last season with a question mark at quarterback position, but the team did not miss a step as new quarterback John David Baker put together a 40-touchdown season. The Wildcats hope that he can help usher in another new era as he returns to groom his successor as a graduate assistant.

Collums officially handed the keys to Baker’s replacement during off-season when sophomore Parker McKenzie beat out junior Malcolm Ruben for the starting job.

“Parker McKenzie is our starting quarterback, he finished the spring that way,” Collums said. “He is an accurate passer who can throw on the move or in the pocket.”

ACU’s other new faces in primary positions have had time to sit and watch former stars which should help on the offensive side of the ball. ACU replacements for receiver include: Demarcus Thompson, Monte Green-Avery, Jace Hudson, transfer Jonathan Epps, and returner Cade Stone.

Senior Demarcus Thompson enters this season with the most experience at receiver. Thompson has had 66 catches for 916 yards and six touchdowns in three years behind Taylor Gabriel, Darian Hogg, and Darrell Cantu-Harkless.

The offense has two strong replacements for Charcandrick West at running back. Junior transfer and Abilene native Herschel Sims looks to play a huge role this season along with redshirt freshman De’Andre Brown.

The Wildcats’ strongest position on offense this year is tight end. ACU returns all three starters at tight end and a lot of red zone production as all three combined for 29 catches for 249 yards and 11 touchdowns last season.

Defense will be the Wildcats’ strong side of the ball this season. The unit returns eight starters including the entire secondary. The secondary will be led by hard-hitting safety Angel Lopez. Lopez led the team in tackles last year with 109 total tackles. Fellow senior Justin Stewart will start opposite Lopez for the second consecutive year, giving the Wildcats a huge edge in the secondary.

The defense boasts a solid linebacker core with two senior starters: Justin Stephens and Blake Rudd. The defensive line brings back multiple contributors including senior Nick Richardson, who is just 11 sacks away from breaking the all-time ACU sack record set by Reuben Mason with 34.

“The defense looks real good,” Richardson said. “We have eight starters coming back so there’s not much adjusting to do – we just need to fill in the pieces. With all the returners, we know the defense, we are just building on what we had last year.”

An exciting season and era starts today for the Wildcats at 6 p.m. at the Georgia Dome, airing live on ESPNU.