By Denzil Lim
Posted on May 1, 2014 | News,Showcase | Comments Off on Former Yankee player encourages students 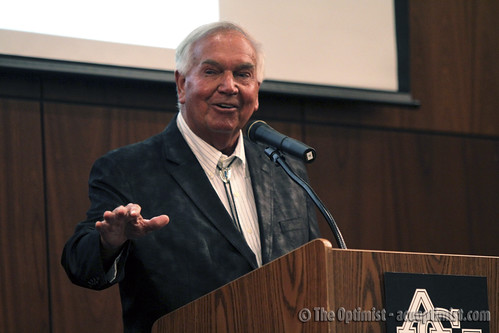 Former NY Yankee, Bobby Richardson, speaks to faculty, staff, and students from multiple Universities about his accomplishments as a Christian. (Optimist photo by Deanna Romero)

Former New York Yankee legend Bobby Richardson visited campus last Tuesday as the the key speaker at a luncheon organized by ACU and Fellowship of Christian Athletes. Richardson spoke about his success in baseball, unwavering love for God and his dream for young, faith-driven athletes.

According to an article by Lance Fleming from ACU Sports, Richardson was an eight-time All-Star and five-time Gold Glove winner from 1955-66. Respected as one of the most talented second basemen during his time with the Yankees, Richardson led his team to three world championships. He played in eight World Series and is the only player in baseball history to be awarded MVP honors from a losing team.

He was a close friend and ministered to Mickey Mantle. Mantle eventually made the decision to accept Christ as his savior. After battling liver cancer, Mantle’s funeral was officiated by Richardson as a national event. Since retiring from baseball, Richardson has coached for Liberty University and Coastal Carolina University. He is a national leader in the Fellowship of Christian Athletes.

ACU’s Center for Building Community partnered with FCA and ACU Athletics to fly Richardson to Abilene. Dr. Gary McCaleb, vice president of ACU and executive director of the Center for Building Community, emceed the luncheon in the McCaleb Conference Center. The event was held in the Hunter Welcome Center where the public could purchase individual tickets for $30 or a table for $200.

During his opening speech, McCaleb said ACU is honored to have a legend on campus to speak and catch the hearts of young athletes.

The conference room was filled with fans, faculty, students, athletes and media who were interested in Richardson’s speech. He spoke about the events that brought him to the Yankees and how he developed strong friendships with his teammates. He also talked about the importance of young athletes having a Christ-centered life.

Richardson was presented with an award for his achievements in sports and faith and was given an ACU jersey.

While in a press conference before the luncheon, the Optimist had the opportunity to speak with Richardson. Before the interview started, Richardson asked if there was a ball game on Tuesday. He had a plane to catch at 3 p.m. while the game was at 6 p.m.

“If your plane left later, you could have played second base for us. We’re having a little trouble there,” said Lance Fleming, associate director of athletics for media relations.

When asked why it was important for athletes to keep their faith in line, Richardson said, “How good would it be for Christian athletes to band together with the idea of winning and influencing young boys and girls to Christ. So FCA was formed and I think it’s a wonderful organization that will challenge and impact young people.”

This, he said, is the reason he came to ACU.

“A university that understands God’s word is relevant and is teaching young boys and girls to not just think about the world view, but their faith in a living savior,” Richardson said. “So I am excited to be asked to come out and be here.”

Richardson also spoke about the issues athletes face when entering the professional world.

“I signed right out of high school as a 17-year-old and it was difficult,” he said. “You’re put into a new pressure-related situation to do well. The only way you can keep your job is to do well.”

Richardson did not have a good start when he was signed, he said. However, after he received encouraging words and verses from his coach, he persevered in the minor league and went on to the major league.

Richardson was not ashamed of his faith and said because he kept his faith open, seven of his teammates received Christ.

When asked if he had any advice for young athletes, he said, “I think the priority in each of our lives is to know and to love and to walk daily with Jesus Christ. And I think all those problems and struggles would take care of themselves.”

Richardson said he had a mentor who was seven years older than he was who encouraged him in baseball by helping him train and giving him support. Richardson had the opportunity to lead his mentor to Christ later in life. He surrounded himself with Godly men who helped keep his spiritual life together and succeed in baseball.

Richardson said his most memorable point of his life was being able to be in crusades with Billy Graham five different times around the country.

“First, Madison Square Garden in New York and the crusade went on forever,” he said. “Then I was asked to be in Honolulu, Hawaii to share my story on national television, and on two occasions in Tokyo at the training camps, sharing my testimony and having a wonderful time.”

These meetings made Richardson understand the power of example, he said.

“Don’t let it breakdown at home,” he said, “where our true nature is revealed, and in particular, it’s not a religion or philosophy, but the reality of a living savior.”

Following the luncheon, Richardson had a signing booth outside the conference room for his book, “Impact Player: Leaving a Lasting Legacy On and Off the Field”. Young and old stood in line with Richardson’s book in hand, Yankee caps and other Yankee merchandise for their turn to get a signature and picture with Bobby Richardson.