By Collin Wieder
Posted on May 1, 2014 | Sports | Comments Off on ‘Cats look to win last home series 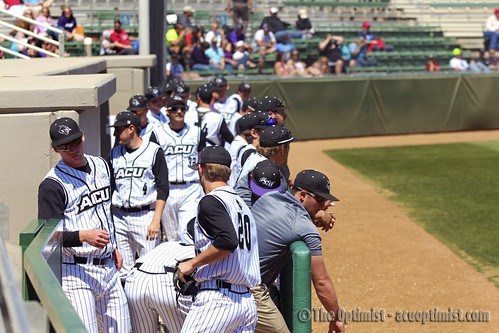 The Wildcats defeated Texas-Permian Basin 4-3 Tuesday with a walk-off hit by pitch in the bottom of the ninth at Crutcher Scott Field. (Optimist photo by Jarred Schuetze)

ACU’s baseball team will take on the second-best team in the Southland Conference this weekend in Texas A&M-Corpus Christi.

The Wildcats enter this weekend going 2-2 over their previous four games. They went 1-2 against conference opponent Houston Baptist University over the weekend, and had a walk-off win over University of Texas Permian Basin Tuesday.

Despite the .500 stretch, the Wildcats found their pitching stride allowing only 3.5 earned runs per game. The ‘Cats might have also found another starting pitcher in freshman outfielder and pitcher Russell Crippen. Crippen’s appearance against HBU gave the Wildcats their only win all weekend. Crippen went five innings only allowing one earned run.

Head coach Britt Bonneau said he can see the team getting better, especially after this weekend.

“We really played a lot of great baseball this weekend,” Bonneau said. “We put three games together that were really good. We only had one error on the weekend.”

ACU will need the pitching staff to play well against Texas A&M-Corpus Christi as they rank third in the conference in batting average and runs.

“They are a team that can really hit,” Bonneau said. “Every weekend has been a challenge for us and we’re about to go through a stretch of really quality teams.”

ACU’s offense continues to be led by senior Seth Spivey who climbed up to second in the conference in batting average after the team’s last four games. Spivey’s season numbers have improved to .361 batting average, four home runs and 12 doubles.

Corpus Christi brings in a subpar pitching staff to combat the Wildcats. The Islanders bring in a team-earned run average of 4.56, and the team is second worst in the conference in hits allowed this season with 454.

Spivey is confident in the team’s abilities as they head into the weekend, as well as the toughest part of their schedule.

“We are staying confident, practicing hard and playing hard,” Spivey said. “It’s been a lot of fun playing all of these big teams, but we just need to stay confident and work hard.”