By Collin Wieder
Posted on April 8, 2014 | Sports | Comments Off on Wildcats struggle at home 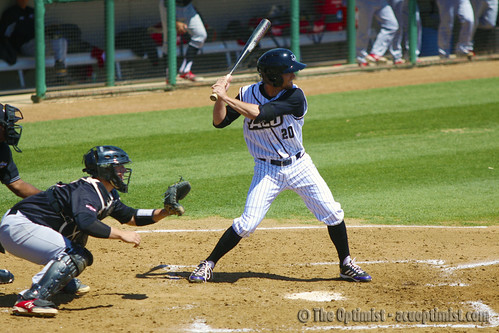 ACU baseball took a step back this weekend when conference opponent Lamar swept them in a three-game series.

The Wildcats opened up the weekend with a close 6-4 loss on Friday. Sophomore starter Joe Gawrieh threw three shutout innings in his first start. The bullpen continued the shutout into the fourth inning when sophomore relief pitcher Stuart Platke gave up five earned runs in his only inning of work. The offense rallied late but it was not enough.

Saturday’s game started off like it would be a blowout as Lamar jumped out to an early 4-1 lead. Freshman pitcher Mack Morgan’s second start ended after just two innings when he allowed three earned runs. Sophomore Nate Cole came in to relieve Morgan and pitched five innings only allowing one earned to help bring the ‘Cats back. Lamar gave up the lead in the fourth as the Wildcats scored three runs in a wild pitch, error filled inning. However, ACU gave up the game winning run the eighth giving Lamar a 5-4 win.

Starting pitcher, sophomore Garrett Demeyere felt that Cole’s performance was great even in a loss.

The series finale ended on a different note, as Lamar scored 16 runs on 20 hits in the Cardinals series sweeping 16-7 win. Demeyere, the leader on ACU’s pitching staff in earned run average, saw his ERA shoot up from 2.47 to 3.67 in Sunday’s loss.

The Wildcats were only one game under .500 entering the weekend but ended 12-16 overall and 2-4 in the Southland. Senior Seth Spivey’s streak of batting .400 came to end as it dipped down to .387 for the season. Freshman Brandon Grudzielanek brought his average up to .400 and took the top spot in the Southland Conference.

Head coach Britt Bonneau says the weekend was a setback but the Southland is a good conference and they are looking to win those types of games in the future.

“I was disappointed we got swept at home it’s not something that happens very often around here,” Bonneau said. “We are finding out real quick how tough this conference is and we just to compete and get stronger as a unit and try to come together and win some of those.”

The Wildcats head to Huntsville this weekend for a series against a 21-11 Sam Houston State team.