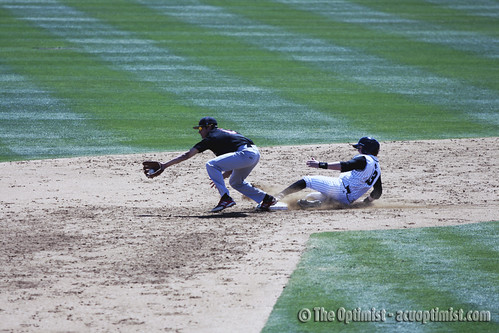 Freshman outfielder Chris Altimont slides into second base to avoid the out in the Wildcats’ series against the Incarnate Word Cardinals. The Wildcats lost game one, but took games two and three, 4-2 and 4-1. ACU is now 12-13. (Optimist photo by Jarred Schuetze)

ACU started off the weekend with a rough pitching outing in their first game, giving up 11 runs to the Cardinals. Sophomore pitcher Nate Cole started the first two innings, allowing seven earned runs. Geno Encina picked up the win for the Cardinals going eight innings and only allowing three earned runs.

The inconsistency in the first game seemed like it would plague the ‘Cats all weekend. The offense failed to pick up the slack as they only scored three runs on eight hits, and the pitching staff did not have a great outing.

The second game for the Wildcats shifted the momentum of the weekend with a 4-2 win. Sophomore pitcher Garrett Demeyere had a solid outing only allowing two runs in 6.1 innings of work. Demeyere did a great job of holding off Incarnate Word’s offense that recorded 11 hits, but only added up to two runs. ACU was able to produce just enough on offense to pull out a tight win.

ACU’s final game of the weekend was another close one. The Wildcats and the Cardinals scored a run in the first inning, but that would be the last time the Cardinals would bring a man in to home plate. The Wildcats offense scored three more runs in the third and that proved to the difference-maker in a 4-1 ACU win.

Freshman pitcher Mack Morgan incurred no earned runs in six innings and took his first win of the season. Senior southpaw Brady Rodriguez pitched three shutout innings to finish the game and pick up the save.

Head coach Britt Bonneau said he is excited about the effort that his team put into the weekend.

“With the exception of the first two innings of the whole series, we pitched pretty good,” Bonneau said. “We had two great starts by two quality pitchers from Demeyere and Morgan.”

ACU now stands at 12-13 overall with a 2-1 Southland record. The Wildcats return to action this weekend for a series at Crutcher Scott Field against Lamar University (15-14, 2-7).