By Dystanie Douglas
Posted on April 30, 2014 | News,Showcase | Comments Off on Seniors say farewell at devotional 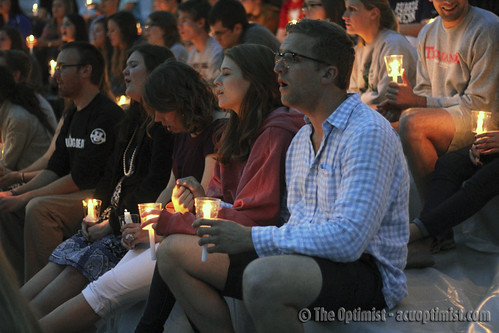 The Student Alumni Association hosted a candlelight devotional Tuesday night in the Amphitheater as a senior send-off for the first time.

The Candlelight Devotional is an annual tradition that typically takes place during Welcome Week. It is a memorable experience for all new students who attend ACU.

During the devotional, each new student is given a candle to light and then walks through a tunnel of upperclassmen and alumni singing hymns and spiritual songs, welcoming them to the ACU community.

This year, the Student Alumni Association decided to change up the tradition of the Candlelight Devotional by using it not only as way of welcoming new students to ACU, but as a way of saying goodbye to graduating seniors.

Aubree Selinger, senior family studies major from Grapevine, is the president of SAA and organized the event.

“I went to a conference this summer and I saw different traditions that go on at different campuses,” Selinger said. “I thought to myself ‘I wish we had something that we could commemorate more.'”

Sellinger said that’s when she realized a candlelight devotional could be a senior commemorative tradition.

“We do such a great job of welcoming the freshmen, why not further that and do it as a senior?” Selinger said.

Seniors who took part in the candlelight devotional experience were very excited to be a part of the first group of students to participate in this new tradition.

“It is really exciting to be able to be the first class to participate in the event. It is something new and hopefully will continue for years to come,” said Faye Bitner, senior political science major from The Woodlands.

“While a lot of departments on campus have senior dinners or ceremonies for students, I think it is really important for ACU to have a commemorative event where all seniors on campus can gather together for a time of both reflection and celebration,” said Kylee Craggett, senior social work major from Garland.

At the the freshman candlelight devotional, the light represents students’ new light and the journey they are about to embark on during their next four years at ACU, Selinger said.

At the senior candlelight devotional, SAA wanted to emphasize a different message.

She said they wanted to communicate that although the seniors are leaving ACU, they are still a part of ACU and taking their light into the world.

“I like the fact that, as a freshman, it is the beginning of your journey here and the senior send-off is like you are completing the cycle,” Bitner said. “I see it as a great accomplishment to make it to the send-off.”

Candlelight Devotional is one of the ACU traditions students keep with them throughout their time here.

“I definitely get nostalgic thinking back to Candlelight Devotional freshman year,” Craggett said. “I was new on campus, didn’t know anyone and was apprehensive and unsure of what to expect in college. Now, as a senior, I feel at home on campus and will be surrounded by a group of people who have become so dear to me.”

Posted by Dystanie Douglas on Apr 30th, 2014 and filed under News, Showcase. You can follow any responses to this entry through the RSS 2.0. Both comments and pings are currently closed.  - This post has been viewed 13468 times.
Related Posts:
» Panoramic: Beauchamp Amphitheater - 12/5/2013
» Panoramic: Amphitheater at Twilight - 12/1/2012