Preserving the past: Chambers and Bennett’s legacies are remembered

By Brittany Jackson
Posted on April 30, 2014 | News | Comments Off on Preserving the past: Chambers and Bennett’s legacies are remembered 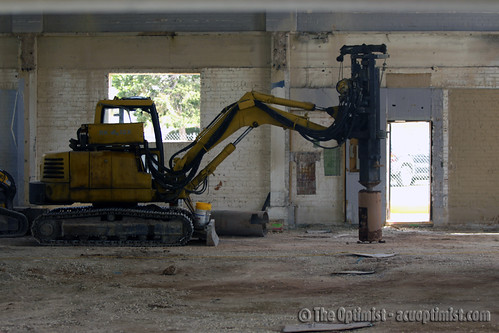 Construction workers move quickly to transform Bennett Gymnasium into an engineering lab as a part of Vision in Action. (Optimist photo by Jarred Schuetze)

“I met my wife here,” said Dr. Charlie Marler. “We were both in the same class. We did date a little bit in the library when we had to, when we had assignments that made it necessary.”

Marler, now professor emeritus and senior faculty of journalism and mass communication, spent countless hours dining in the Bean, going on dates with his wife to-be in the library and accumulating college memories with friends before graduating in 1955.

Now, almost 60 years later, Marler will watch as the age-old Chambers Hall is leveled to make way for a new science facility.

Destruction as a last resort

During the past 75 years, these buildings have served campus in many different ways.

“I would say that we think it’s very important that we’re stewards of the gifts that people give us,” he said. “And so, if someone has given us the funds to build a building, then we want to make sure that we do everything possible to take advantage of that and to use it and preserve it as long as possible.”

Bennett Gym, another original campus building, is being remodeled into facilities for the Department of Engineering and Physics. It was home to many basketball and volleyball games over the years, as well as special events.

Zona Luce housed an elementary and high school for Abilene Christian Schools and then served as the Department of Agriculture and Environmental Sciences building until last year, when it began housing the School of Nursing.

The original buildings’ infrastructures have held up well to this day, with the exception of Chambers, said Kevin Roberts, chief planning and information officer.

Roberts said when deciding Chamber’s future, a lot of it came down to the building itself. Chambers is showing its age. It has been added on to and remodeled several times. Its air conditioning, heating and plumbing systems are 40 years old, the offices are cramped, and the building is inaccessible to anyone with mobility issues.

“That’s embarrassing,” he said. “We don’t need to have that. That’s just not who we are, and certainly not what we aspire to be.”

Currey said the university wants to hold on to its buildings as long as they’re useful.

“But there comes a time when you just can’t change it again. Its useful life is over when that point is reached.”

University leaders decided Chambers was too dilapidated to remodel.

Foster Science Building, which was constructed in 1948, itself has gone through two renovations. One added an east and west wing, and another remodeled the center of the building.

In time, history is certain to repeat itself as buildings continue to age on campus.

Thirty-three years after the construction of these buildings, another fundraising campaign spread across the university. “Design for Development” was led by the National Development Council and resulted in a campus-wide construction project.

Given the original buildings’ current lifespan of about 75 years, these buildings are far from having to be destroyed, but remodeling is always an option. Especially with the increasing amount of interest and number of applicants for the university, ACU will have to evaluate the future of the campus as a whole.

As for the buildings, countless families have invested in this university and its mission, with their names on buildings being the most forefront evidence. Destroying the buildings, or even remodeling them, superficially removes those names from the legacy.

The university will have to think of a way to reconcile this loss to the families and a way to continue their history here on campus.

“It’s a balancing act all the time, trying to preserve that heritage…if at all possible, we always try to save a building and refurbish it as opposed to losing it,” Roberts said. “Especially some of the classically historic buildings.”

In the future, Currey said the university would resolve this matter by communicating with donors’ families.

“If it were possible to go back and find folks who were around who were family members, we would have conversations with them,” he said. “I think it’s probably too strong to say that they could veto [a decision], but we would certainly talk with them.”

In fact, Dr. Robert Rhodes, provost, said conversations had taken place with the Bennett family. They discussed the preservation of the building and advancement plans the university had drawn up.

“You want to honor the spirit of what the family desired,” he said. “I think those families realize the institutional needs change over time, but it’s still a partnership and a relationship that you want to thoughtful of.”

To preserve the legacy of the donors, the university has set up plaques in buildings, especially those that were renovated in the past.

Such memorials can be seen in the Phillips Building, which was the Burford Music Center, as well as the Money Student Recreation and Wellness Center, which houses the former Gibson Health and Physical Education Center.

As for the new buildings, plaques remembering the Chambers as well as the Bennetts will be placed either in or nearby the buildings. They will mention the families’ contributions to the campus as well as past purposes of the building.

For Bennett Gym, specifically, Roberts said part of the flooring will be removed and placed in a showcase honoring its legacy of past athletic competitions.

From now on, though, Currey said written agreements will be created between the university and donors seeking to fund the construction of a building on campus. The documents created in recent years have laid out how long a naming opportunity is in existence and what kind of say, if any, that donor has if the building were to be repurposed, burnt down or otherwise destroyed.

“We haven’t always had those types of documents here, especially when you go back to 1929,” Currey said. “We don’t have any documents that concern all of that, but I think it is important to say that we are cognizant, once again, of the importance that those families and their gifts have played in our role here.”

Marler said he has spoken with some alumni about the destruction of Chambers, they responded with astonishment and disappointment. But, he said, they were accepting after learning of the advancement plans.