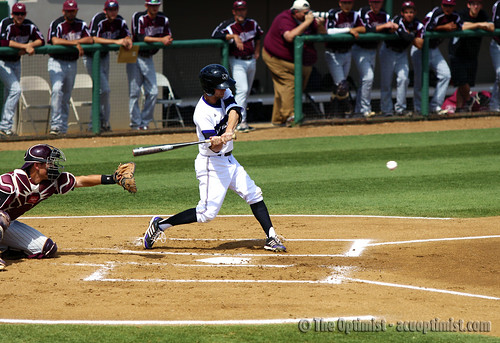 Sophomore Emil Litterer swings at the incoming pitch on Monday against McMurry at the Crutch. The Wildcats gave up five runs in the 6th inning en route to a 7-4 loss. The team stands at 14-23 overall and 4-7 in conference play. (Optimist photo by Mandy Lambright)

The ACU baseball team ended its nine-game skid this weekend as it took two out of three games in the series against Stephen F. Austin.

The Wildcats started off the weekend with a rough 12-8 loss on Thursday night. They had a nice comeback after being down 3-0 early on, but gave up a six-run fifth inning to solidify the loss. The Wildcats hit well as junior outfielder Colton Hall and sophomore Heath Beasley each went 2-for-4.

Friday, the ‘Cats battled back to win on a close 8-6 finish. Senior pitcher Brady Rodriguez picked up his first win of the season in seven innings of work. Rodriguez allowed only three earned runs and had five strikeouts in his tenth career win as a Wildcat. Freshman infielder Brandon Grudzielanek continued his great season by going 3-for-5 with two runs batted in.

“We hadn’t won in a while and didn’t have a great game Thursday night,” head coach Britt Bonneau said. “It doesn’t take a rocket scientist to figure this stuff out. If you get good pitching, you will have a chance to win.”

The final game of the weekend included a pitching duel from ACU’s Garrett deMeyere and SFA’s Kevin Bishop. The game was scoreless through six innings until the Wildcats scored two in the bottom of the seventh to send Bishop to the dugout. Tyler Wiedenfeld came in to relieve Bishop but gave up one more run in the eighth to give the Wildcats the 3-0 victory. deMeyere put on a clinic as he completed the first complete game shutout for the Wildcats in nine years. deMeyere allowed only four hits and zero walks to pick up his fourth win of the season.

“I was really impressed with how he was able to pitch on both sides of the plate,” Bonneau said. “We made some good plays behind him that helped him out. I felt like that game alone, when we needed a hit, we got it.”

ACU finished five games in six days with a game Monday against McMurry. Starting pitcher Ladgie Zotyka started well but gave up the lead in the fourth with two runs. The bullpen did not find a rhythm after that, allowing five more runs and giving McMurry the 7-4 win, their first ever against the Wildcats. The offense found themselves in familiar territory scoring only four runs on 10 hits. Senior infielder Seth Spivey led the offense going 4-for-4 with two runs batted in. Brandon Grudzielanek also extended his hitting streak to six games by going 3-for-4 on Monday.

The Wildcats will return to action Friday in San Antonio to face Incarnate Word. First pitch will be at 2 p.m.