‘Cats on prowl for Cards

By Collin Wieder
Posted on April 3, 2014 | Showcase,Sports | Comments Off on ‘Cats on prowl for Cards 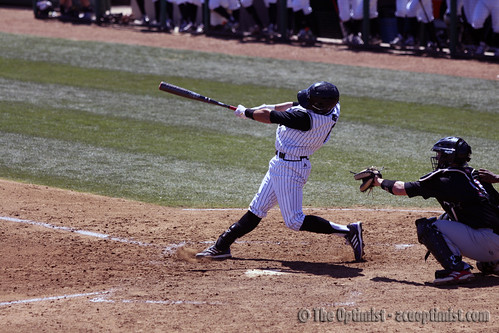 Senior Seth Spivey hits a ball to right center field last weekend. Spivey is one of the top hitters in the Southland Conference, leading the conference in hitting with an average of .404 and has also hit three home runs.(Optimist photo by Jarred Schuetze)

The Wildcats will need a solid weekend from their pitching staff as Lamar brings in a great offense that has a .286 team average and a .384 on base percentage.

To combat Lamar’s great offense they will need help from starting pitcher Garrett Demeyere. Demeyere leads ACU in earned run average with 2.47 and is fourth in the conference in innings pitched with 47.1. The ‘Cats will also be looking for a second great start from freshman Mack Morgan. Morgan went six innings in the last game against Incarnate Word and allowed zero earned runs.

Garrett Demeyere said he felt that Morgan’s performance was not out of the ordinary, even though it was his first start.

“He did what he usually does mixing pitches and throwing strikes,” Demeyere said. “That’s really what we expected out of him, it’s hard to hit a guy like him.”

The Wildcats offense should continue their dominance heading into the weekend as their team batting average sits at .305. The ‘Cats have six incredible players who are hitting .300 or higher on the season. The offense has been helped by a group of young players this year. Three of the six players include three freshmen Gunnar Buhner, Aaron Draper and Brandon Grudzielanek.

Even with all the incredible numbers ACU has put up, they will face a great pitching staff in Lamar that will challenge them. Lamar ranks fourth in the conference in ERA with a 3.49 earned run average.

Head coach Britt Bonneau said he hopes to find another starting pitcher this weekend and that the team will use the series against Incarnate Word to improve as they go along.

“Hopefully we can carry this momentum, hopefully we can find a starter for game one,” Bonneau said. “Every week is going to be a challenge for us to try and just figure out what this league is about.”