By Collin Wieder
Posted on April 15, 2014 | Sports | Comments Off on ACU suffers sweep to Bearkats 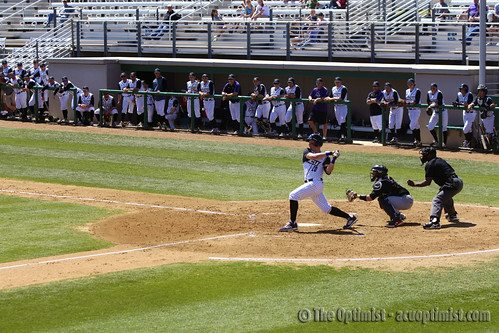 Freshman Russell Crippen hits a line drive up the middle for the Wildcats in a game at Crutcher Scott field. Over the weekend, the Wildcats were victims of a two-game sweep at the hands of Sam Houston State, 8-3 and 3-2. (Optimist photo by Jarred Schuetze)

The Wildcat baseball team extended their losing streak to five as they dropped all three games this weekend against the Sam Houston State Bearkats.

The weekend ended with the ‘Cats dropping to 12-20 overall and 2-6 in the Southland, while Sam Houston improved their record to 25-11 overall and 9-6 in conference.

ACU started off the weekend with an 8-to-3 loss in the first game. The bullpen allowed eight runs on 14 hits. Sam Houston’s offense had five players with multi-hit games, including Corey Toups who went 3-for-4 with two home runs. Junior first baseman Tyler Eager led the Wildcat offense with a 2-for-4 game.

Saturday included a doubleheader for the Wildcats. The first game was an 11-inning pitching battle that ended with a 3-to-2 Bearkat win. Corey Toups brought the game to an end when he blasted a walk-off solo home run.

Senior pitcher Brady Rodriguez pitched six innings for the Wildcats, only allowing two earned runs. The bullpen pitched the last 4.2 innings allowing only the walk-off homer to Toups, but it wasn’t enough because ACU’s offense could only muster five hits.

Senior Seth Spivey said the team did what they needed to do to win, they just didn’t execute when it mattered.

“We wished we could’ve come away a victory or two against a ranked team like Sam Houston,” Spivey said. “We pitched well to win all three games, we just couldn’t get timely hits or good at bats.”

Saturday’s second game continued the offensive struggle for the Wildcats as they stranded 11 runners in their 7-to-0 loss. The offense got eight hits, but could do nothing with them as freshman pitcher Sam Odom picked up his seventh win of the season.

Offensively, ACU hit only a .194 batting average all weekend, but they played an almost error-free series as they only had one error all weekend.

ACU returns to the diamond Wednesday in College Station to take on Texas A&M. First pitch will be at 6:35 p.m.