Baseball welcomes UIW to the Crutch

By Collin Wieder
Posted on March 28, 2014 | Sports | Comments Off on Baseball welcomes UIW to the Crutch 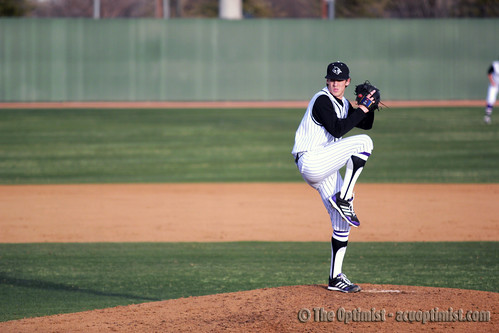 Freshman pitcher Aaron Draper winds up in his delivery in game against Texas College for the Wildcats. (Optimist photo by Austin Kilcullen)

The ACU baseball team will host it’s first Southland Conference opponent of the year with a familiar face in University of Incarnate Word.

ACU enters this weekend with a 10-12 record while Incarnate Word enters with a 6-15 record. The three-game series starts with a game on Friday at 6 p.m. and it begins both team’s Southland season.

The Wildcats will enter with momentum from their two-game sweep of Texas College. ACU overwhelmed the steers in seven innings during the first game by run ruling them 10-0. The complete performance for the Wildcats included 13 hits from the offense, and a five-hit shutout game from pitcher Austin Lambright.

The second game of the series continued ACU’s dominance with a 6-1 win. The ‘Cats scored their six runs on eight hits and the bullpen pitched a solid six innings, only allowing one run.

Head coach Britt Bonneau said he the two wins help the team heading into the weekend.

“It felt good to win two games,” Bonneau said. “It felt good to come off the field after competing and having that kind of high energy and overall it was a good day for us.”

ACU’s bats will look to continue this success as they have four players with a batting average over .300 including conference leader Seth Spivey, who is batting .427. The Wildcats lead all Southland teams in batting average with a .308.

Even with the great sweep against Texas College, ACU still ranks toward the bottom of the Southland in pitching. A rough stretch of Div. I games this year has dragged the Wildcats era down to 5.34, which ranks second to last in the Southland.

The Wildcats still have a bright spot with their pitching woes in sophomore pitcher Garrett Demeyere. Demeyere leads the Wildcats in innings pitched with 41 and is first among the starters in earned run average with 2.41

“I feel I’ve been successful so far,” Demeyere said. “As long as I hit my spots and change speeds there’s a good chance for success.”

Bonneau said, “We are still struggling as far as finding the right third pitcher to throw. We have used a few different guys, but we are still going to use Nathan Cole and Garrett Demeyere. We are just going to keep running guys out there until somebody steps up and they show that they deserve to start.”